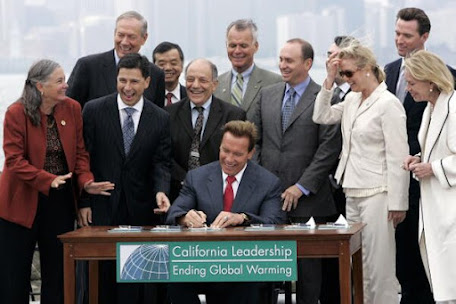 That is California Governor Arnold Schwarzenegger, seated in the center, signing The Global Warming Solutions Act of 2006. The woman in the red jacket, on the far left of the picture, is Fran Pavley.
It was Pavley who first introduced the bill, Assembly Bill 32, that was ultimately enacted and then signed into law. To her immediate left is Fabian Núñez, who became the main author of this historic legislation, claiming that privilege as the Speaker of the Assembly.
Without a doubt, at the time it was signed into law, AB 32 was the most far-reaching and important legislative effort to combat global warming that had ever been enacted, anywhere in the United States. The legislation was amended, and strengthened, in 2008, by Senate Bill 32, legislation also carried by Fran Pavley, who by that time had moved to the California State Senate.
I think it is time to update The Global Warming Solutions Act once again. The law is found in the California Health and Safety Code, starting at Section 38500. You can click that link to view the law. As the law is currently structured, the California Air Resources Board (the ARB) is the state's designated lead agency, and the ARB is charged with "monitoring and regulating sources of emissions of greenhouse gases that cause global warming in order to reduce emissions of greenhouse gases" [Section 38510].
That still makes sense. I was a member of the ARB, once, and I can attest that it is an incredibly effective state agency, with scientists and lawyers on staff, and with a proven record of taking on the state's biggest polluters and making them reduce or eliminate dangerous emissions.
But changes are needed. For one thing, a so-called "Cap and Trade" system, mandated by the Legislature, but operated by the ARB, allows major polluters to continue to emit greenhouse gas emissions, if they will just pay the state some money for the privilege of continuing to pollute. This program shifts to the state the responsibility for making emission reductions somewhere else, as opposed to making the polluter reduce those emissions in the first place, right where they are being generated.
Our world is in crisis, and the rule ought to be this: If it is technically possible to reduce a greenhouse gas emission then it should be mandatory for a polluter to eliminate or reduce that greenhouse gas emission at the earliest possible time. That is what our laws and regulations really ought to provide. No more hoping that "market mechanisms" will prompt good behavior. No more "Cap and Trade" escape routes.
Our global warming crisis is a matter of life and death - planetary life and death. We should have zero tolerance for the continued emission of any greenhouse gas pollutant that can be eliminated or reduced, and our state law should make this absolutely clear. What about language along the following lines?

The State Air Resources Board shall ensure that every action that is technically possible to be taken, to eliminate or reduce any current greenhouse gas emission, shall be undertaken at the earliest possible time, with the objective of ensuring that the state achieves net zero carbon emissions by 2030.

The Global Warming Solutions Act should also institute a new effort. Not only do we need to eliminate or reduce current greenhouse gas emissions, we need to establish an active and effective program to "draw down" carbon dioxide that is currently in the atmosphere. Our laws should mandate that the state achieve ongoing and increasing net negative carbon sequestration rates, to the maximum extent technically feasible.
The idea I am advancing here is pretty simple. If there is a feasible way to eliminate or reduce any greenhouse gas emission - if there is a technical way to accomplish such an outcome - then we need to mandate the elimination or reduction of that emission at the earliest time possible. Similarly, we need to do everything we possibly can to "draw down" carbon dioxide currently in the atmosphere - again, as quickly as we can accomplish that. We are in a crisis here. We need all hands on deck.
That brings me to my final suggestion. While I do endorse the ARB as the logical agency to implement the state's greenhouse gas elimination program, it is time for the State Legislature - our elected representatives - to take direct responsibility for leading the effort to eliminate or reduce, to the greatest degree possible, any greenhouse gas emissions occurring within the State of California.
I would like to see the Legislature maintain continuing oversight of both the development and implementation of the program of emissions reduction measures, and measures to increase carbon sequestration.
To that end, the Legislature should establish a Joint Committee on the Global Warming Crisis, composed of ten members of the Assembly and ten members of the Senate. This Joint Committee should meet as frequently as the Committee may decide, but the Joint Assembly-Senate Committee should be required to hold a public oversight hearing on a quarterly basis.
The Governor should be required to address the Committee at each such oversight hearing, and members of the public should be permitted to speak - to provide both suggestions and criticisms.
The Air Resources Board should also be required to present a report to the Joint Committee, at each one of the Committee's quarterly meetings, outlining the status of the state’s efforts to reduce greenhouse gas emissions and to increase carbon sequestration in each of the following areas: (1) Transportation; (2) Energy; (3) Industrial Activities; (4) Residential and Commercial Buildings; (5) Agriculture; (6) Natural Lands; (7) Water; (8) Waste Management; (9) State Government Activities and Operations, and (10) Local Government Activities and Operations.

Did I say, "all hands on deck?" That is what we need. Just like in World War II, we need completely to reconfigure what we're doing, and we need to begin immediately.
I only wish that Fran Pavley were still around in the Legislature, to provide the leadership we need! Let's see who might be willing (and able) to take her place, and to make California into a global leader in the fight to stop global warming (and to protect all living things on Planet Earth).
Image Credit:
https://www.newsmax.com/fastfeatures/global-warming-solutions-act/2014/12/14/id/612572/