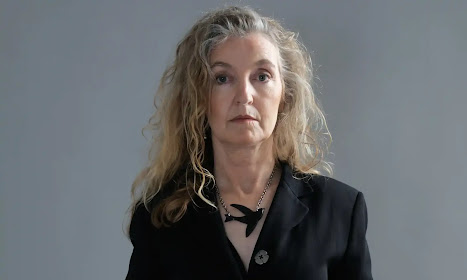 Rebecca Solnit, pictured, has written an engaging article in The Guardian, "Stop Glorifying 'Centrism.'" The points she makes are related to the points made in my recent blog posting, "The Sasquatch Of American Politics." Here is an excerpt from Solnit's article that will give you the flavor of her argument:

The idea that all bias is some deviation from an unbiased center is itself a bias that prevents pundits, journalists, politicians and plenty of others from recognizing some of the most ugly and impactful prejudices and assumptions of our times. I think of this bias, which insists the center is not biased, not afflicted with agendas, prejudices and destructive misperceptions, as status-quo bias. Underlying it is the belief that things are pretty OK now, that the people in charge should be trusted because power confers legitimacy, that those who want sweeping change are too loud or demanding or unreasonable, and that we should just all get along without looking at the skeletons in the closet and the stuff swept under the rug. It’s mostly a prejudice of people for whom the system is working, against those for whom it’s not (emphasis added).

The "rarely seen but fervently sought" ideal of "bipartisanship," a demand that there be general agreement before changes are made, is, just like "centrism," a snare and delusion. A search for general agreement, or "bipartisanship," is the "Sasquatch of American politics" that I wrote about earlier, and "bipartisanship" is definitely an example of status quo bias. What we need is neither "bipartisanship" nor "centrism." What we need is the courage to make real changes that will address the looming dangers that we have failed to acknowledge as real, and that are heading our direction.
Solnit gives an example:

A decade ago, when I went to northern Japan for the first anniversary of the Great Tohuko Earthquake and tsunami, I was told that the 100ft-high wave of black water was so inconceivable a sight that some people could not recognize it and the danger it posed. Others assumed this tsunami would be no bigger than those in recent memory and did not flee high enough. A lot of people died of not being able to see the unanticipated (emphasis added).

I have written, previously, about the "Great Wave." I said then, and say again now: "the alarm has been given. There will be no time but this present time in which to choose. The Great Wave is on its way."
If we are to succeed in "fleeing higher," as we must, any demand that we find our solutions "in the center" is to dismiss the possibility that our ability to make real change, and to avoid the dangers coming our way, will not, in the end, be found in the center at all, but will be found somewhere else.
Image Credit:
https://www.theguardian.com/books/2020/mar/21/rebecca-solnit-interview-recollections-of-nonexistence-hope