#168 / Relational Theory And Our Political World 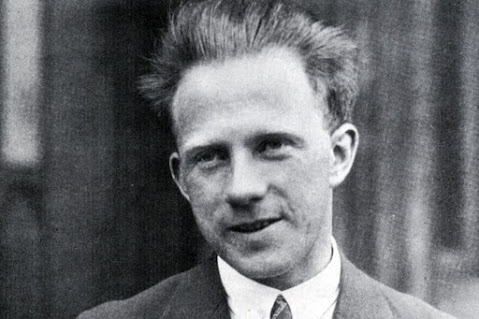 Werner Heisenberg, pictured above, revolutionized physics. He is perhaps best known for his articulation of what has been called the "Heisenberg uncertainty principle." If you click on that link, to learn more, you had better be pretty adept at mathematics!
Not being pretty adept at mathematics, I have to rely on words, as I keep trying to understand the essence of quantum physics. A book review in The Wall Street Journal has helped (at least somewhat). The review is by John Banville (and, yes, this means the Irish novelist John Banville, who I guess is interested in physics, too). Banville's review is titled, "The Paradox of Particles" and discusses a recent book by Italian physicist Carlo Rovelli, Helgoland: Making Sense of the Quantum Revolution.
Here are Banville's concluding paragraphs:

Mr. Rovelli follows the trail of quantum theory through some delightfully unorthodox byways, including Buddhist mysticism and Russian revolutionary politics, to arrive at last at the notion that is most dear to him, that of the “relational” interpretation of quantum theory. Although he explains this version of ultimate reality at the atomic level with characteristic flair and enthusiasm, he does not pretend it is easy to understand, or any less counter-intuitive than Heisenberg’s matrices or Schrödinger’s hovering cat.

“Everything,” he writes, “is what it is only with respect to something else.” The electron is manifest only when it interacts with another object, even if that object is only the questing eye of the observer. Reality in the quantum world is tenuous, fleeting, “intricate and fragile as Venetian lace. Every interaction is an event, and it is these light and ephemeral events that weave reality,” not the manifold of whizzing billiard balls envisioned by the old science. “Reality, including our selves, is nothing but a thin and fragile veil, beyond which . . . there is nothing.”

This is not a counsel of despair; quite the contrary. Mr. Rovelli’s is a radiant void, quick with potential, in which objects, or “objects,” have their being through contact with and dependence on each other. And in this interdependent, interlocked world, the way to enlightenment is through co-operation not confrontation. For all his delicacy of touch, Mr. Rovelli is a man, and a scientist, of large ambition. It is time, he declares, to bring the relational theory into general discussion, “beyond the restricted circles of theoretical physicists and philosophers, to deposit its distilled honey, sweet and intoxicating, into the whole of contemporary culture”... (emphasis added).

If we count politics, law, and government as aspects of our "contemporary culture," Heisenberg, by way of Rovelli, by way of Banville, is suggesting that they must all be understood as "relational," having existence only as we acknowledge that our political, legal, and governmental world is "interdependent," and that we must live in it "through cooperation not confrontation."
Do I know more about quantum physics now, having read this review? Not really.
Still, it's nice to think that there is a genuine validation in quantum physics for my views on our human world! That's how I am reading Banville, on Rovelli, on Heisenberg!
Image Credit:
https://www.wsj.com/articles/helgoland-review-the-paradox-of-particles-11622231175