#146 / The Sasquatch Of American Politics 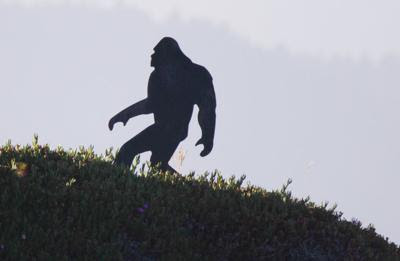 John Lawrence, who is the author of The Class of '74: Congress After Watergate and the Roots of Partisanship, says that "bipartisanship has become the Sasquatch of American politics." It is "rarely seen but fervently sought."
This comment is found in Lawrence's May 1, 2021, column in The New York Times, headlined as follows in the hard copy edition: "The Futility of Peace In Politics." Online, the column is titled, "You Don’t Actually Need to Reach Across the Aisle, Mr. Biden."
Lawrence says that "insisting on bipartisanship - given the major policy divide between the parties on economic recovery, tax reform, climate change and health care - usually guarantees gridlock.... There is nothing wrong with being partisan."
My experience, admittedly at the local level and as a nonpartisan elected official, convinces me that this statement is correct. "Politics" is the way we make decisions about what we should do. Opinions differ - as in fact they ought to. When opinions do differ, the purpose of our politics is to make a decision. That has to be the aim and objective. Insisting on "bipartisanship" does bring gridlock, as Lawrence says, and part of the reason it does so is because a fervent insistence on bipartisanship - the feeling that only measures enacted on a bipartisan basis are actually "worthy" - makes a partisan unwillingness to compromise more likely rather than less likely.
In Santa Cruz County, in the 1970s and 1980s, there was a huge and consequential battle about growth. Opinions did differ. I was elected to the Board of Supervisors because of my commitment to try to slow down and manage growth, and to protect farmlands and natural lands. Others were elected because they had exactly the opposite agenda. Views in the community did differ - and strongly differed. In the end, the side I represented won. A majority in the county wanted to slow down, manage and control growth. This was effectively demonstrated not only by the outcomes of supervisorial elections, but also by the enactment of Measure J, in 1978, by a countywide vote.
There were lots of appeals along the way to compromise, with "compromise" sounding like something fair, and equitable, and to be desired. In our nonpartisan local government setting, "compromise" was the equivalent to what "bipartisanship" is at the national level.
Here is how Lawrence ends his column:

Our ideologically segregated parties should use political power to accomplish objectives promised in campaigns and then let voters decide if the party has earned the right to govern. True, this approach could result in sweeping policy changes, but voters would then have clarity about whom to hold responsible for governing successes and failures (emphasis added).

The people's frustration with government isn't that it is too "partisan." Largely, the people's frustration is that our government has consistently failed to take on and address the large issues that face the nation, and to make a decision. Nothing is happening. The climate catastrophe gets worse. Income inequality continues to spiral. Adequate health care is unavailable to many. It would be "nice," perhaps, if everyone could just come up with solutions on a "bipartisan" basis. But seeking any such solution means that nothing changes. It is time for our Democratic Party president and the Democratic Party majority in the Congress (slim as it is) to "accomplish objectives promised in campaigns."
The voters can decide, when something is actually accomplished, whether what was was accomplished is really what the majority want. There is always another election to decide just that.
Searching for a "bipartisan" solution, like searching for Bigfoot, is not how to make our politics work.
Image Credit:
https://www.goskagit.com/360/sasquatch-conference-welcomes-enthusiasts-and-skeptics/article_da2831c0-cd91-576f-9ef4-f875587cbc7a.html