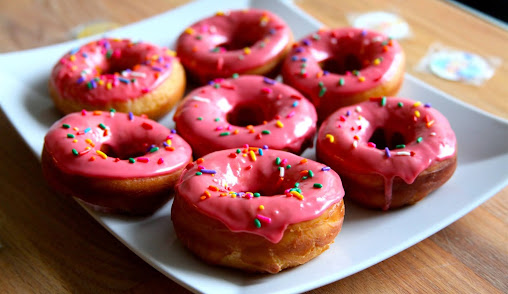 According to a recent article in Time online, the City of Amsterdam is promoting a new economic theory that could replace capitalism. Really! They call it doughnut economics. This doughnut economics theory could also help stop global warming, or such is the claim.
Considering where we are today, with global warming threatening to take down the current version of human civilization in pretty short order, and with economic inequality a massive problem almost everywhere in the world, I am personally willing to entertain new ideas to solve our problems, even if the name of the proposed solution suggests that it might be fattening.
Here's how that Time article begins:

One evening in December, after a long day working from home, Jennifer Drouin, 30, headed out to buy groceries in central Amsterdam. Once inside, she noticed new price tags. The label by the zucchini said they cost a little more than normal: 6¢ extra per kilo for their carbon footprint, 5¢ for the toll the farming takes on the land, and 4¢ to fairly pay workers. “There are all these extra costs to our daily life that normally no one would pay for, or even be aware of,” she says.
The so-called true-price initiative, operating in the store since late 2020, is one of dozens of schemes that Amsterdammers have introduced in recent months as they reassess the impact of the existing economic system. By some accounts, that system, capitalism, has its origins just a mile from the grocery store. In 1602, in a house on a narrow alley, a merchant began selling shares in the nascent Dutch East India Company. In doing so, he paved the way for the creation of the first stock exchange—and the capitalist global economy that has transformed life on earth. “Now I think we’re one of the first cities in a while to start questioning this system,” Drouin says. “Is it actually making us healthy and happy? What do we want? Is it really just economic growth?”

"Growth" is not my idea of "good." It never has been, and that is particularly true for the kind of rapid, "exponential" growth that so many people want to achieve - particularly where multiplying money is involved.  I wrote about the topic of exponential growth on this blog way back in 2010, in a posting titled, "Bug In A Bottle." That is one of many blog postings supporting what is usually characterized as my "no growth" position. I had that "no growth" reputation when I was on the Santa Cruz County Board of Supervisors, which is now a pretty long time ago. "No Growth Gary" is what I was called. Some people still hold my "no growth" ways against me, though many have decided that protecting our flourishing agricultural lands and our beautiful North Coast was the right choice after all.
At any rate, a solution that questions the imperative that our economy must always "grow," is a solution that I am very much willing to explore. Here is the basic idea of "doughnut economics," as Time presents it:

In April 2020, during the first wave of COVID-19, Amsterdam’s city government announced it would recover from the crisis, and avoid future ones, by embracing the theory of “doughnut economics.” Laid out by British economist Kate Raworth in a 2017 book, the theory argues that 20th century economic thinking is not equipped to deal with the 21st century reality of a planet teetering on the edge of climate breakdown. Instead of equating a growing GDP with a successful society, our goal should be to fit all of human life into what Raworth calls the “sweet spot” between the “social foundation,” where everyone has what they need to live a good life, and the “environmental ceiling.” By and large, people in rich countries are living above the environmental ceiling. Those in poorer countries often fall below the social foundation. The space in between: that’s the doughnut (emphasis added).

Time diagrams the idea this way: 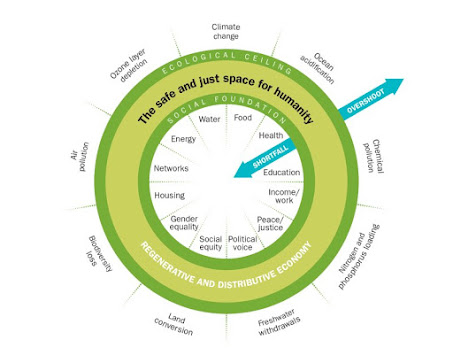 Determining to build an economy and society that limits the growth of economic activity, to make sure that the society resides "under" the ceiling of what is required to maintain and protect the Natural World (upon which we are, ultimately, totally dependent) sounds like a good plan. Building an economy and society that provides economic and social goods that are "above" a baseline, floor level that provides a decent life for all human beings, also sounds like a pretty good prescription to me.
When you read the article, which I encourage, you might start asking some practical questions. How, in fact, do we know what activities and enterprises will exceed the limitations of that ecological ceiling? And, on the other side, how can we be sure that there will be a willingness, within the society, to provide all human beings with that decent life that will be aimed at, as a floor, if it turns out that this will require a reduction in the privileges and amenities of the ultra-wealthy?
"Doughnut City," in other words, is likely to be easier said than done. But as for a way to describe the kind of political goals that all cities, all states, and all nations should be shooting for, count me in as a supporter of this "doughnut economics" prescription.
Image Credits:
(1) - https://www.patesmith.co/glazed-simpsons-doughnuts-recipe/
(2) - https://time.com/5930093/amsterdam-doughnut-economics/