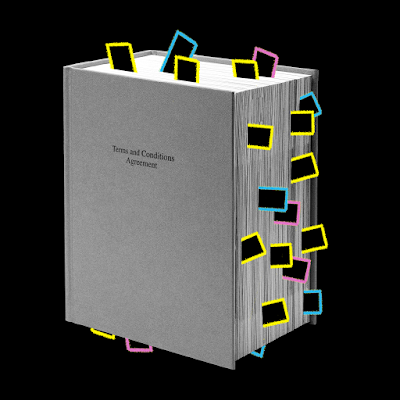 I know that lots of people feel somewhat guilty about signing up for some new online account or application without checking out the "fine print," the "terms and conditions" that will govern how users are treated by the application that will be providing them with the services that they are hoping to utilize. After all, signing something without reading it just isn't the right way to be responsible. Right?
Right. But... what's the real point of reading those "terms and conditions," anyway? It's not like you can negotiate for anything except what is being offered. The only real question is whether or not you want to use Gmail, Facebook, Twitter, Tik-Tok, Spotify, Snapchat, or any of the other online applications that have now become ubiquitous, and that are actually quite essential to many people's lives. If you want the service you "accept" the terms and conditions. There isn't any other option.
The "contracts" established by our decision to accept the terms and conditions imposed by those internet platforms and application providers - and make no mistake, when we "accept" those terms and conditions we are definitely entering into a "contract" - are a "take it or leave it" deal. That kind of a contract is called a "Contract of Adhesion," and internet service providers aren't the only ones that use them, either. In fact, automobile insurance policies, healthcare policies, title insurance policies, appliance warranty contracts, rental agreements, and many other such contracts, make "adhesion contracts" the most common type of legal contract which most consumers are likely to encounter.
An editorial in the January 23, 2021, edition of The New York Times, suggests that "It's Time To Fix The Fine Print." Here's how The Times outlines its concerns:

Violations of such terms and conditions agreements recently gave Amazon the power to block the right-leaning social media site Parler and for Twitter to ban Donald Trump and to sweep tens of thousands of QAnon pages into the digital ether. Time will tell the degree to which tech companies will police their own sites in the coming months and years. But if they do, terms and conditions will be a pretext they use to do so.
The potential for abuse on the one hand and restricting speech on the other hand has spurred calls for major reforms to the tech sector from politicians of both parties. Courts and lawmakers are also zeroing in on reforms to terms of service agreements that would help reset the balance of power between consumers and tech companies. At the same time, several large companies, like Google and Facebook, have been buffeted in recent months by antitrust lawsuits and investigations into their market dominance. Regulators and lawmakers say their propensity for acquiring smaller rivals, gobbling up user data and striking exclusive deals with one another has allowed them to operate illegal monopolies that ultimately hurt consumers.

How, though, do you actually "fix" this problem? Individual negotiation won't work, as already discussed. What about a methodology that would allow us to negotiate collectively?
There is such a methodology. It's called "legislation," or "regulation." Decisions about what the internet platforms must do can be established by appropriate legislation and/or by regulations promulgated by governmental agencies. I, for one, would like to see a "standard" set of terms and conditions that would apply to all internet providers, and that would level the playing field, giving us, collectively, the ability to "bargain" and "negotiate" with these billion-dollar behemoths.
An online news article, dated January 22, 2021, makes clear just how arbitrary the giant internet platforms have become.
It's time to renegotiate. It's time to fix the fine print!
Image Credit:
https://www.nytimes.com/2021/01/23/opinion/sunday/online-terms-of-service.html