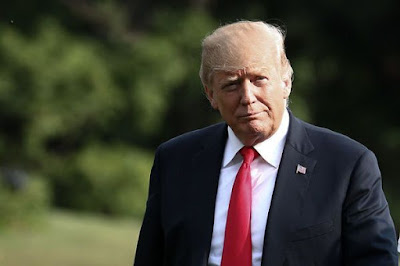 On October 22, 2019, The New York Times printed an article with the headline (hard copy edition): "Trump's Base Is Steadfast Even as Troubles Mount." Why is that, do you think?

My opinion is that our president inspires such fierce loyalty because he vividly portrays, in person and in everything he does, the resentment and sense of betrayal that many Americans feel about their lives in general, and about their government in particular. Whatever happens, Trump claims that some powerful person or agency has "framed him," or has "betrayed" him, or has "misrepresented" him, or has "downrated" him, or has "ignored" him, or has, in some other way, treated him unfairly. Government employees are always in the wrong. Donald Trump's sense of grievance is unending. He is truly an "underdog billionaire."

Those who have no ability live out the "billionaire" part definitely identify with the "underdog" part. I think that this is key to Donald Trump's political success (of course, the fact that he communicates, naturally, at a third-grade reading level also helps).

As I searched for an image to accompany this blog posting, I typed "underdog billionaire" into a search box, looking for images. What came up was the picture above, which accompanied an article from the Trump Times, titled, "Donald Trump, Billionaire Underdog." It looks like the Trump campaign well understands the phenomenon I have identified as critical to his success. Here, for instance, is a comment from a Trump Times reader:

Those who are not captured by the narcissistic, "I am abused" message of our current president, should understand that it nonetheless constitutes a powerful appeal to millions of ordinary Americans. Trump's "underdog" appeal is so powerful because so many Americans are and have been mistreated by the realities of our economic, political, and social situation. In other words, many Americans have a very reasonable case to make, as Jennifer Sasser says, that our "elites" are "rigging every thing," and rigging it against ordinary Americans.

Donald Trump seems authentically to be on the side of those who feel themselves abused - since the sincerity of Trump's sense of being abused is beyond question. To beat Donald Trump, an opposing candidate needs to convince the Trump "base" that the opposing candidate is on the side of the millions of Americans who have been abused and ignored by our political system and our elected officials.

Who are the candidates most clearly trying to make that case, and showing some empathy for those who comprise the Trump "base?"

I would identify Bernie Sanders and Elizabeth Warren. I think that is why they are high in the polls.