#298 / What I Just Read In The Wall Street Journal 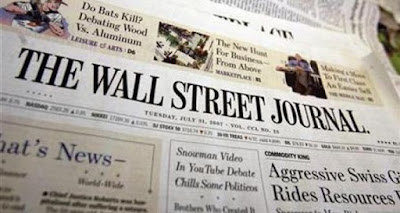 The Journal does have pretty good news coverage (so that's a plus), and the paper often covers news stories that I don't always find in the other newspapers I read. That's another plus. But the basic reason I read The Wall Street Journal every day is precisely because I tend to disagree with its editorial positions. I believe that it is important to hear opinions that I do not, generally, agree with - and I find that I DO agree, sometimes, on at least some points, which is a kind of preventative medicine against the pandemic of polarization that is undermining our political and civic life.

On Wednesday, October 23, 2019, I found one news story, one column, and one editorial of particular interest (and importance). Since I subscribe to the paper, I have no trouble accessing its online content. However, I am pretty sure that the paper maintains a "paywall," so if you can't penetrate the links I am providing, my apologies!

Here are those links, to the three items I found of particular importance in the October 23, 2019, edition:

I encourage those reading this blog posting to read the articles linked above (if you can get access). Most important, I think, is the article on the Trump rallies. Anyone who wants to understand contemporary politics at the presidential level needs to come to grips with the fact that Donald J. Trump is a master politician. More than anything else, excitement wins elections. Politics is not a "spectator sport." Donald Trump's rallies are masterfully orchestrated and are specifically designed to increase political participation on his behalf. I used to be a politician. His rallies are a model of effective politics. Call them deplorable if you wish. In large part, they are. But let's not underestimate!


In the article on Hillary Clinton's charge that Tulsi Gabbard is a "Russian asset" (and this is an opinion column, not a news story or an expression of the paper's editorial board), the effectiveness of Donald Trump as a politician is the big message I took away from the column. I agree with this observation, excerpted from the column on the Clinton-Gabbard controversy:

Opposition to Mr. Trump’s pullout may not be as widespread as the candidates imagine. In a Rasmussen poll, 55% of Democrats (and 69% of Republicans) agreed that “it is time for us to get out of these ridiculous endless wars, many of them tribal, and bring our soldiers home.” The pollster didn’t identify the speaker of those words—Mr. Trump.

Donald Trump made himself a political celebrity in 2016 by persuading news media to talk about—Donald Trump. He did it mainly by the expedient of saying outrageous things—by trolling, in the parlance of social media—and it worked. It’s still working ...

In all of the items that I read on Wednesday, and that are summarized above, the message is the same. Donald Trump (malignant narcissist though he may be) is an extremely accomplished politician, and past formulas are not likely going to work to defeat him. I have written another blog post, recently, along the same lines. So what to do?

One way to win an argument is by making a "concession," prior to and as part of one's own argument. This is a textbook rhetorical technique. I think political opponents should be considering how they can conceed to our current president some of the arguments he is making to his "base," before laying out the arguments that can move the voters their way.

Just a thought! What I read on Wednesday in The Wall Street Journal convinces me that a temptation to scorn what our president says and does plays right into his hands.