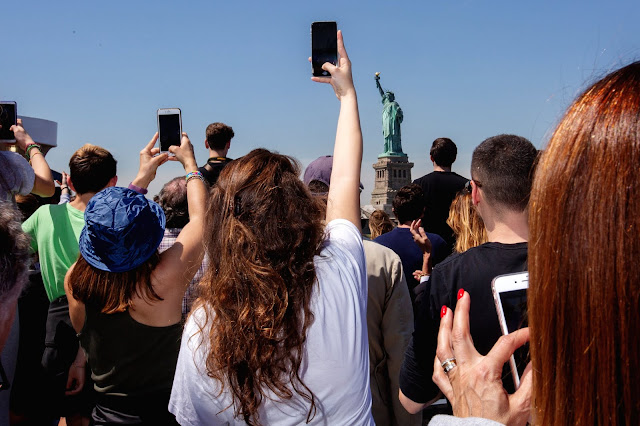 The title of this blog posting is, apparently, the first Twitter post sent forth by Bianca Vivion Brooks, the author of an opinion column that appeared in The New York Times on Saturday, October 5, 2019.

I was struck by Brooks' feeling that her postings on Twitter were crucial to the establishment of her  human "identity." She believes, as she states in her column, that many "millennials" have made such an equation. To "live" is to "Tweet." To "live" is to "post."

I realize that to many millennials, a life without a social media presence is not simply a private life; it is no life at all: We possess a widespread, genuine fear of obscurity.

Obscurity means darkness, and being in the dark is not a good thing. Not shining forth any light of one's own is also not very desirable. That word, "obscurity," as used in Brooks' column, reminded me of a related word, "anodyne."

In other words, Bianca Vivion Brooks wanted to define herself as the opposite of "anodyne," and in order to to that, she felt she needed to go beyond the "analog" world, which is the world into which we all are born.

What Brooks discovered (it took her awhile) is that our "analog" life ("analog" meaning "not digital," "not computerized," according to Merriam-Webster) is not, necessarily, a diminished life. An "analog" life does not have to be anodyne and inoffensive and obscure. We don't discover or experience "liberty" by raising our cellphones!

I certainly don't eschew a life that is involved with social media (witness this blog posting, which also appears on my Facebook Timeline). But let's not get confused.

Life "online" is part of, and not a substitute for, "real" life.

And it doesn't have to be anodyne, either!