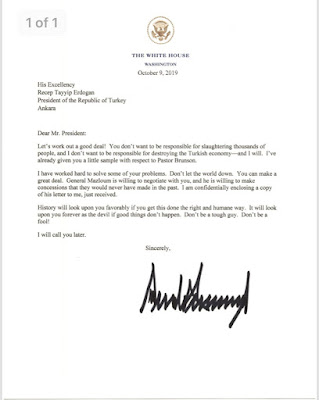 President Trump's letter has been roundly denounced. The President of Turkey, for instance, said it showed a high degree of disrespect. "We haven't forgotten," he said. In fact, in the latest word, President Erdogan is now threatening President Trump right back.

From its initial begging plea ("let's work out a good deal"), to its blustering threat to "destroy the Turkish economy," to its final demand that Turkey's president should "not be a fool," the Trump letter is definitely over the top. "Disrespectful" is maybe a benign way to characterize this communication. Some have called it "insane."

The fact that the president pitches both his official and unofficial communications at a third-grade reading level is probably one of the keys to his political success. At least that's what I think. The president is popular because he's a populist. None of that "fancy pants," "suffed shirt" behavior for him! In other words, the "over the top" letter to President Erdogan may have been offensive to Erdogan, and to those in high places in the world of political and social commentary, but the ordinary person might well have had exactly the opposite reaction.

On Saturday, October 19, 2019, The New York Times ran a story that specifically makes this point. President Trump goes out of his way to make sure that the presidency is never seen as "boring." I consider this New York Times article to be high-priority reading for anyone who is distressed by how our current president conducts himself both substantively and in terms of "style." I recommend you read it, and that we all take it seriously. To beat the president in an election, it's important to understand why he has such a strong base of bedrock popularity. I think the following excerpt from the article shows why:

At one point during one of his most unpresidential of days, President Trump insisted that he knew how to be presidential.

“It’s much easier being presidential, it’s easy,” he told a stadium full of more than 20,000 boisterous supporters in MAGA hats and T-shirts cheering his every word on Thursday night. “All you have to do is act like a stiff.”

He buttoned his suit coat, pursed his lips, squared his shoulders and dropped his arms rigidly at his sides. “Ladies and gentlemen of Texas,” he then droned in a sleep-inducing staccato monotone the way he imagined most of the other 44 presidents had done. “It is a great honor to be with you this evening.”

The crowd loved it, roaring with laughter. Transforming back into the unpresidential president America has come to know, Mr. Trump added, “And everybody would be out of here so fast! You wouldn’t come in in the first place!” Being presidential, he was saying, is so boring. Who wants that? 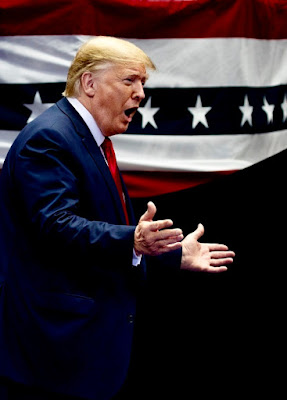 I have to admit that the President knows how to be entertaining. And I think that the president's letter to Erdogan and a lot of the president's policy pronouncements appeal to a very large share of the American public, who have something like contempt for most elected officials (both foreign and domestic). If we don't want four more years of this president (and I sure don't), we are going to have to figure out why it is that the president has been able to maintain his "base," despite the fact that his actions in office have generally undermined the interests of those who tend to support him most.