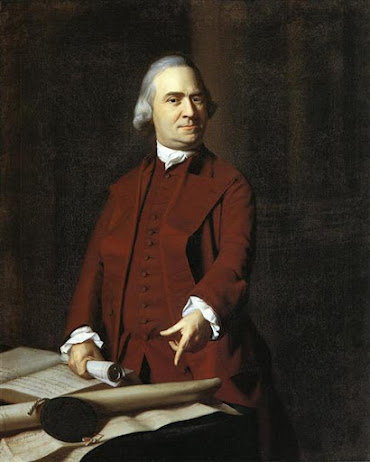 Just in case you don't recognize him (and I'm betting you don't), that is Samuel Adams, depicted above, in a famous painting by John Singleton Copley. Stacy Schiff is the author of a new book about Adams, The Revolutionary: Samuel Adams, and her characterization of Adams is reflected in this portrait:

He is a man fortified by, mobilized by words. With his left index finger he directs us to the Massachusetts charter. With his right hand he clenches the town instructions in a manner that suggests that ideas, too, deliver lethal blows. The result is a battle cry of a painting.

Now, I have not read Schiff's book (it's on my list), but I can tell you with some certainty that Samuel Adams is my kind of guy. If you don't want to put out $30+ for the hardback edition, and/or can't track down this book at your local library, I recommend the book review by Mark G. Spencer, which appeared in the Saturday-Sunday, October 8-9, 2022 edition of The Wall Street Journal.
Paywalls permitting, I think it would be good for you to catch up, a bit, on Samuel Adams. He is someone who, as Schiff has it, ranks “with, if not above, George Washington.” Schiff tells us that Adams (Samuel in this case, not John) was “eulogized in the Boston papers as ‘the Father of the American Revolution.’” He was “singled out as the prime mover in private diaries,” and Schiff quotes Thomas Jefferson to say that Adams was “truly the man of the Revolution.”
I am definitely "pro" the American Revolution. That's what I studied when I was a history undergraduate, and our revolutionary expectations and commitments (never fully realized, the way I see it) might well be brought back for an encore, right about now. Hannah Arendt's thoughts on the topic are quite persuasive. The "lost treasure" of our revolution has been left by the side of the road.
If I ever "paint my masterpiece," as Bob Dylan might say, and manage to shuffle all these blog postings into some kind of book, a book with an actual thesis, I will be aiming to provide some helpful advice on "action," not mere "observation." How about this for a title: "Transforming Our Politics: Renewing Our Revolution"?
I wouldn't mind trying to reprise the role of Samuel Adams. He is definitely my kind of guy!
To Subscribe Just Click This Link
Image Credit:
https://www.wikiart.org/en/john-singleton-copley/samuel-adams