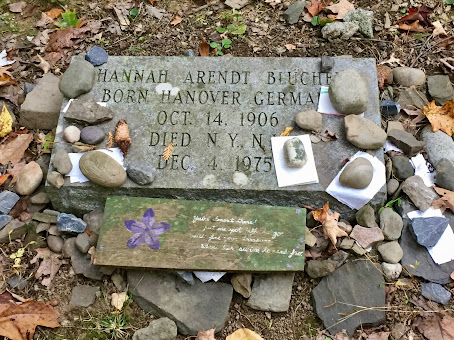 An article in The New York Times about self-driving cars raises some questions. Maybe we should be asking "why" human beings should be attempting to find ways to escape from and replace human action, as we most certainly are doing. As The Times' article makes clear, it turns out that it is not as easy to replace human drivers as Elon Musk initially thought it would be. Let's stipulate, though, that it can probably be done. The "why" question remains. Why should we want to replace human drivers? I think that's the most important question.
As it turns out, Hannah Arendt has addressed this question in her wonderful book, The Human Condition. Arendt has died (her grave is pictured above), but her ability to challenge us to think has not disappeared. Roger Berkowitz, the Founder and Academic Director of the Hannah Arendt Center for Politics and Humanities, which is located at Bard College, in upstate New York, has written a rather brief article that I believe is worthwhile reading for all of us.
Berkowitz' article is titled, "The Human Condition Today: The Challenge of Science." It is only six pages long, and clicking that link will take you right to it. It summarizes the much longer book (which I also recommend).
Berkowitz makes clear that Arendt, in fact, is the person who first propounded that "Two World Hypothesis" that I have spoken about so often in these blog postings - although Arendt doesn't use that exact phrase, which is my own. Arendt says that humans are both "earthly," and "worldly," and states that "The Earth is the very quintessence of the human condition." The Earth, in the way Arendt uses the term, is what I call the "World of Nature," the world upon which we ultimately depend.
"While we live on the earth that is given us," Arendt says, "we live too in a humanly created world of tangible and intangible things." This is the world that I call the "political" world, a world in which anything is possible, but a world that is still, inevitably, dependent on the World of Nature.
So "why" do we seek to replace human action? We do so, says Arendt, because we reject the idea that we should be dependent on the earth and its limits.
In The Human Condition, Berkowitz says, Arendt names Sputnik as an "event, second in importance to no other," because the satellite is a worldly step toward the age-old human wish to rebel against our biological, given, and earthly existence."

If we can escape the earth, if we can build an artificial planet or space station where we would live in a fully artificial environment, if we can manufacture designer human beings freed from the chanciness of fate, then we can slough off the mortal coil that connects us to our earthly quintessence; we can reject the gift of life as it is given to us and remake it, neither in God's image nor as accidents of fate, but in accord with our own human will. We can, this means, play God. And in doing so, we risk losing one part of our human condition, our earthiness, our being subject to chance, fate, and fortune.

Our "modern project," according to Berkowitz, is like the so-called "singularity" anticipated by Ray Kurzweil: "In the coming era of machine-human civilization, we humans will be machine-like and machines will become humans to such an extent that we would not be able to tell the difference."
If we credit Arendt (and I think she is right), then what we see all around us is an effort by human beings to reject the idea that we are limited by our inevitable dependence on the Earth, the "World of Nature." This is, in fact, a rejection of the natural world itself, because the Earth, as we are finding out, has definite limits that constrain our human actions.
Our global warming crisis, for instance, is caused by a human decision to deny that we must conform to the requirements of a world that we did not create. We are putting to the test the idea that we can decide for ourselves what we want to do, unconstrained by Earth and its limits, and that we humans can use "science" to construct any kind of world we want.
Can we really create whatever human world we want, turning ourselves into machines as we work out how to do that? We can try. That's the apparent "why" we are doing everything we are doing as we submit ourselves to "technology" in order to prevail over the Earth, to deny the limits of that World of Nature into which each one of us is born, created by a mystery and not by our own activity and choice.
Berkowitz tells us that Hannah Arendt has made clear in The Human Condition that humans may well decide to exchange their biological and earthly existence for a new human existence, one that we, as humans, will design and make for ourselves. The only question, Arendt believes is "whether we wish to use our new scientific and technical knowledge in this direction, and this question cannot be decided by scientific means; it is a political question of the first order and therefore can hardly be left to the decision of professional scientists or professional politicians."
We face, it seems clear to me, not only a "political question of the first order," though that is indubitably true. We face also an immense spiritual crisis. We ignore this at our peril.
To Subscribe Just Click This Link
Image Credit:
Gary A. Patton, Personal Photo