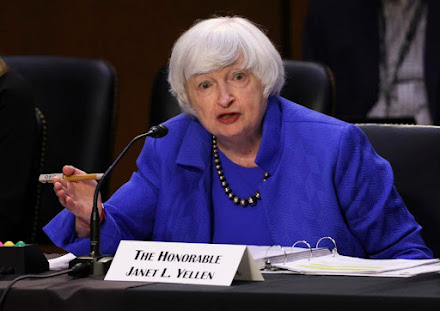 The United States government has been operating on borrowed funds. According to The New York Times,  the United States has now amassed a debt of $31 trillion dollars. That amount of debt is "six times what it was at the start of the 21st century."
I, personally, think that it would have been a lot better to raise the money we spent by taxing those who had some money (particularly the super-rich), so we could match what we spent to what we raised in taxes.
However, that is not what the Congress and the President chose to do. We borrowed money, and then we spent what we borrowed. If you happen to be someone who lent money to the United States government - and people all over the world did - you assumed that the United States government would pay its debts, and it's pretty clear that the government can pay its debts. However, will it?
Maybe not, huh? According to current news reports, the United States House of Representatives has decided that it's not going to vote to have the government pay its debts. Not unless the President and the Senate accede to the demands of the right-wing Republicans now in power in the House. Janet Yellen, our Secretary of the Treasury, has been warning that we are in for big trouble if the government does not, in fact, pay its debts. The world pretty much runs on the assumption that the United States will pay what it owes, and if our government formally repudiates its obligation to do that, much of the financial architecture upon which our world depends will come crashing to the ground.
Jamelle Bouie tells us not to worry. He says that the Republicans are engaged in a "debt ceiling bluff." The Constitution, in fact, specifies that the national debt shall "not be questioned." Typically, the Congress votes, specifically, to raise the debt ceiling when the government is about to spend more than what the law says the government is willing to repay. Bouie says that failure to enact such a law, now, is basically inconsequential. The Constitution has more effect than any "law," so let's rely on what the Constitution says. Don't let the House Republicans bamboozle you! That's Bouie's prescription.
Without specifically saying so, Bouie is suggesting that we let the Supreme Court make the financial decision that the Congress is, apparently, unwilling to make. Well, that is one approach.
I'm hoping though, that our elected officials in the Congress aren't going to have to cede even more authority over our government to the judiciary. My idea is pretty straightforward. If we shouldn't be running up a huge operating deficit by borrowing money to pay for what the government does (and I'm willing to say I don't think we should),  we do, nonetheless, need to pay back what we borrow, and we need to make that clear.
Paying our debts?
That's a pretty basic rule!
Even right-wing Republicans should be able to appreciate that!
To Subscribe Just Click This Link
Image Credit:
https://www.forbes.com/sites/brandonkochkodin/2022/12/06/why-janet-yellen-is-about-to-become-even-more-powerful/?sh=103d487c01bc