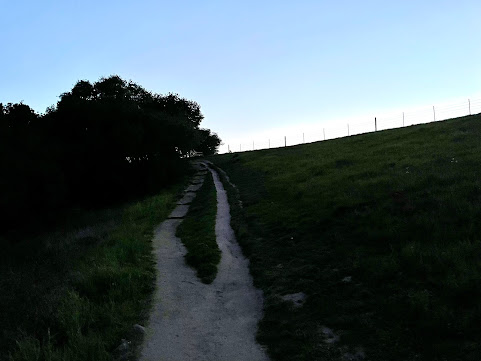 Exactly one year ago today, on December 31, 2021, I published a blog post titled, "Last Day (Songs Included)." The thirty-four songs that were included in that blog posting (and I provided both lyrics and the actual music) were all, with one exception, by Bob Dylan. In that year-ago posting, I referenced an earlier blog post, Memento Mori, a phrase that tells us to "remember we must die."
Remembering that we must die can actually be a pretty good thing - kind of like "Facing Up To Nartsuk" - so I have been working on it. As I was out for a long walk on March 17, 2022, I was thinking about that "Memento Mori" phrase, and thinking about that 2021 "Last Day" blog post, too, as I came up a hill in Arana Gulch, just as night fell. The photo at the top has been brightened just a bit, to give you an idea of where I was. Actually, the way my eyes saw the scene, all I could really make out was that ascending path, and the horizon, while most of the rest of my view was deeply obscure.
As I say, I was thinking about that Memento Mori assignment as I was walking along in the dark, and I was actually doing my Memento Mori homework by listening to those "Last Day" songs, which were playing in my ears as I walked. What sprang into my mind, and what has motivated this year's "Last Day" blog post, was my sudden realization, on March 17, 2022, that the songs that I have been listening to, almost every day since December 31, 2021, have provided me with a kind of "MasterClass" in Memento Mori, with Bob Dylan as the instructor.
I am assuming that most persons reading this will have heard about "MasterClass." Click the link if you haven't, and want to. If you have heard of MasterClass, you will surely know the phrase (which always comes at the end of one of their advertisements): "This is my MasterClass."
That phrase, "This my MasterClass," is exactly the phrase that came to me as I listened to my "Last Day" song list and walked up that steep, dark hill, as just described.
For any who may have missed those songs, a year ago, here's a link that will take you right back to them. Remembering who wrote the songs - so that credit gets properly applied, and goes to Mr. Dylan - I still can't help saying, in inviting you to follow my example, and to listen to these songs, over and over: "This is my MasterClass."
Up the hill, through the fields, over the bridge and home.
Memento Mori.
Image Credits:
Gary A. Patton, personal photos
To Subscribe Just Click This Link
*A NOTE ON MY MISTAKEN NUMBERING:
Attentive readers will note that this blog posting, #365, is the second blog posting with that number. The blog posting published yesterday, December 30th, was listed as  #365, too!
It is my objective, in writing these blog postings, to make one blog post every day. That would seem simple enough; however, I don't write each blog posting on the day I actually post it. Generally, I am ahead of myself as I write these blog postings - sometimes quite a bit ahead of myself. I might write thirty or more blog postings that will end up being published on dates beyond the date on which I am actually writing those posts. Again, that would seem simple enough. What's the problem? Every blog post is numbered sequentially, from #1 to #365. What could go wrong?
Well, what could go wrong (and has gone wrong, this year and in former years) is that I sometimes move around the blog postings, after they are written but before they are published. For instance, I might decide, after having written a blog posting scheduled to be published in the future, that the order of my blog postings should be rearranged, to make a particular blog post more timely. In some cases, during this past year, I moved around blog postings to put a few of my more "religious" blog postings on a Sunday. When I decide to move around a blog posting, I then need to renumber them appropriately. As I found out, when I got to the end of this year, that way of proceeding has occasioned some errors. If there were 365 days in this calendar year (there were), then the posting for December 31, 2022, should be posting #365. Oh, oh! When I got here, I found that posting #365 (this blog posting) was going to be #366. In other words, I double counted, somehow, somewhere along the line.
In fact, as I searched back to see what happened, I found two mistakes. A blog posting numbered #188, published on June 6th, should have been listed as #158. There was, in fact, another #158, also posted on June 6th, so two blog postings, not just one, appeared on that date. In addition, there was also another blog posting #188, posted on the correct date for #188, which was July 6th. It appears that I also published two postings on June 28th, one numbered #179 and one numbered #180. Readers got a couple of extra postings this year, because my numbers were off! My apologies.
As I say, you would think it would be easy to keep the numbers consistent, from #1 to #365, but that has obviously proved a challenge to me. How could I go wrong? It's hard to fathom, especially for someone who used to have a little card pinned to a cork board in my college dorm: "I Never Make Misteaks!"