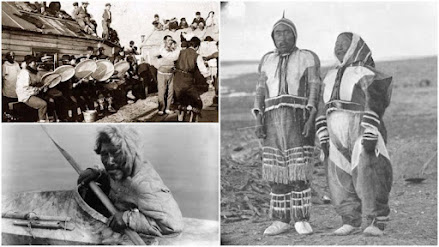 In my blog posting #59, this year, I pledged to read The Ministry For The Future, Kim Stanley Robinson's most recent book. As I am writing this current blog post, I am, in fact, diligently progressing through the book's 563 pages. I feel certain that I will have more to say when I am finished. So far, I am finding this book to be of exceptional interest, less a "fictional" account of the future than a fact-based "Manual For The Future."
On pages 367 - 368 (you can see how far I have gotten), Robinson writes about the Inuit religion. One of the main characters in the novel, Frank, is in prison, and Frank finds a book in the prison library "written by an African man who had traveled up the coast of Greenland in the early twentieth century, staying in Inuit villages. Eskimaux, he called them."
The unnamed African author of this book (possibly a fictional book, or a fictional author, I was not able to tell) said that:

They had a saying in their cold little villages, to deal with the times when fishermen went out and never came back, or when children died. Hunger, disease, drowning, freezing, death by polar bear and so on: they had a lot of traumas. Nevertheless the Eskimaux were cheerful, the man wrote. Their storm god was called Nartsuk. So their saying was, You have to face up to Nartsuk. This meant staying cheerful despite all. No matter how bad things got, the Inuit felt it was inappropriate to be sad or express grief. They laughed at misfortunes, made jokes about things that went wrong. They were facing up to Nartsuk.

This approach to life may, or may not, have some similarities to the Western tradition's philosophical reminder about the inevitability of death, "Memento Mori," which translates as, "remember you have to die."
In an earlier blog posting, I noted that a reminder of the fact that we all must die can, if properly considered, make us joyously aware of the liberating fact that "we aren't dead yet." When I wrote that earlier blog posting, I had not yet encountered the Inuit idea that we must "face up to Nartsuk." Robinson is doing the right thing, it seems to me, to introduce his readers to the idea that we should, like the Inuit, "stay cheerful despite all."
The global warming/climate crisis, which is the subject addressed in The Ministry For The Future, is at least as daunting as the challenges faced by the Inuit in the early twentieth century. We are all with the Inuit now, and they are with us, and so is all the world. Robinson's prescription must be our own:
Face Up To Nartsuk
Face up to it cheerfully! Can we do that? I think Robinson's book is suggesting that this is, exactly, what we need to do.
To Subscribe Just Click This Link
Image Credit:
https://brewminate.com/seeking-environmental-knowledge-from-an-inuit-shaman/