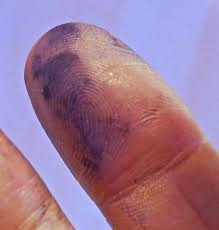 After I read the newspapers each day, I have to wash my hands. Not, let me say, in some sort of ritual to cleanse myself of all the horrible and disgusting things that the newspapers have printed. Rather, it's the print itself that sends me to the sink. I read five newspapers each morning, and by the time I am done, my fingers are pretty inky. If I don't remember to wash up, I smear the kitchen cabinetry with black marks, and turn my computer keyboard grey.
Often, I get an idea from reading the morning newspapers that sends me off to write some sort of blog posting, but it is often just one line, out of all that newsprint, that sets me off.
Here is an example. On Friday, October 7, 2022, New York Times' columnist David Brooks wrote about "The Triumph of the Ukrainian Idea." Mainly, Brooks was writing to justify what he calls "liberal nationalism," of which he sees Ukraine as an outstanding example. Brooks thinks that the United States is another such example, and that we all ought to get comfortable with the idea that we need to be "nationalists."

The war in Ukraine is not only a military event, it’s an intellectual event. The Ukrainians are winning not only because of the superiority of their troops. They are winning because they are fighting for a superior idea — an idea that inspires Ukrainians to fight so doggedly, an idea that inspires people across the West to stand behind Ukraine and back it to the hilt.

That idea is actually two ideas jammed together. The first is liberalism, which promotes democracy, individual dignity, a rule-based international order.

Brooks finishes his column with a quotation from Yuli Tamir, who is an Israeli academic and former politician who served as a member of the Knesset for the Labor Party between 2003 and 2010. Brooks doesn't identify her; I had never heard of Tamir, and I had to look her up, but it was the quote from Tamir that provided the "one line" in all those newspapers that caught my attention:
Self-centered individualism must ... be replaced with a more collectivist spirit that nationalism knows how to kindle.
I am not certain that I would label what Tamir is talking about as "liberal nationalism," but I do think that while we are all "individuals," our ability to survive and prosper requires us to realize that we are "all in this together." We do need to cultivate a "collectivist" spirit that emphasizes our connections, instead of doubling down, always, on all our differences.
That line from Tamir led me from my pile of newspapers, to the kitchen sink, and then to my keyboard. You are reading the result.
"Nationalism" may be, in fact, a way that an appreciation of our profound connection can be "kindled." But my own hope is that we can use the light from that "nationalist" fire to help us see that our connections are not just "national" alone.
As standing up for "nationalism" is now presented, in the context of the possible necessity to engage in nuclear war (limited or not) on behalf of Ukraine, I am ever more convinced that we must realize that we are all "in this together," throughout the entire world, with our connections crossing every boundary - and especially national ones.
To Subscribe Just Click This Link
Image Credit:
https://derrickjknight.com/2013/12/15/inky-fingers/