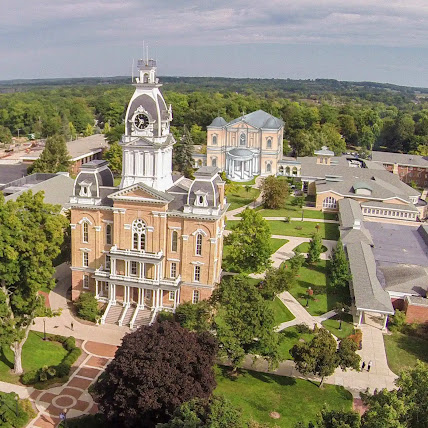 Hillsdale College is offering "Christian MOOCs." What is a "MOOC," you might ask. Here is the definition, for those who are not really up to date on the latest in academic acronyms. A "MOOC" is a "Massive, Open, Online Course." Such courses might even be "free." Click the "Christian MOOCs" link if you'd like to follow up.
Hillsdale College is trying to promote itself. The school is listed as #3 in a "Best Value Schools" listing of "top conservative colleges." According to the Best Value Schools' website, the conservative colleges it lists "are politically right-wing, with the majority of the student body favoring conservative positions like limited government size, gun rights, and outlawing abortion. Many conservative schools are also Christian schools that are more likely to adhere to more traditional social views and rules. These colleges tend to be more strict and regimented than liberal colleges, and typically require students to follow a code of conduct."
You get the picture! This not really the kind of politics I either practice or espouse. I do, however, try to keep up with what Hillsdale College has to say, as one way to make sure that I don't get too isolated in some kind of "liberal" thought bubble.
A couple of months back, when I got the October edition of Hillsdale College's monthly newsletter, "Imprimis," my attention was captured by an article by Jeffrey A. Tucker, of the Brownstone Institute. Tucker's article was titled, "The Economic Disaster of the Pandemic Response." Tucker's argument was that the medical advice given by Dr. Anthony Fauci, and others, led to governmental decisions that had horrible economic consequences (including the significant inflation we now face). Tucker says that mask mandates and pandemic lockdowns led to massive economic calamities.
Well, maybe there is some truth to that! As all those who have been living through the pandemic realize, there has been, and continues to be, a lot of debate about whether mandatory masking, business shutdowns, and mandatory vaccinations were (or are) really necessary. I tend to think that the governmental decisions that shut down public spaces during the pandemic, and that required us to get vaccinations, when they became available, were appropriate, and that they had a beneficial effect. However, I am willing to concede that dealing with the pandemic, in the way the nation chose to do so, did have some negative economic impacts, and I am even willing to concede that the programs adopted by national, state, and local governments may not have been all that well-designed, or even appropriate. Opinions differ, and I could be wrong that the actions that government took were helpful and worthwhile.
Here, though, is a quotation from the Tucker article in "Imprimis" that  has spurred me to today's commentary:

Health and economics both require the nonnegotiable called freedom. May we never again experiment with the near abolition of freedom in the cause of mitigating disease.

Let us assume that mask mandates, mandatory business lockdowns, and mandatory vaccination programs were ineffective and in fact damaging. Now that we can look back, and can evaluate how these programs worked, maybe we might come to that conclusion (as Tucker apparently has). And it is certainly true that the right of individuals to do what they want, without having to obey governmental mandates, was definitely constrained during the pandemic. And maybe those constraints on individual action weren't necessary - and maybe they even had adverse economic impacts, as Tucker contends (opinions definitely do differ).
This really isn't the issue, when we start talking about "freedom." The definition of "freedom" postulated by Tucker assumes that the word means that every individual should be "free" to do whatever she or he wants to do, and that no order coming from the government - even if intended to save lives - should ever be imposed so as to constrain individual activity.
That idea of what "freedom" is all about is based on the idea that we are all, first, last, and always, "individuals." And it is true that we are "individuals," of course! But we are not only "individuals." We are also - each one of us - part of a greater society, and what "freedom" means in the context of that social, economic, and political world in which we most immediately live, is that we, collectively, have the ability able to make decisions about what we, collectively, think we should do.
We can't have "political freedom," the freedom to make collective decisions that bind each one of us, if "individual freedom" gives every one of us a veto, and if "freedom" means that no individual ever has to conform to the rules established by the decisions of our government.
My individual freedom to drive a car, as one example, is often constrained by those pesky red lights, which are sometimes so unnecessary! This is the argument that Tucker is making about governmental decisions to require masking, and business lockdowns, and mandatory vaccinations. Those pesky restrictions were not, really, needed. In fact, they had bad effects.
Political "freedom," which is the freedom that our Constitution guarantees, means that we are, collectively, "free" to make mistakes. Maybe the governmental decisions made in our efforts to combat the pandemic were big mistakes, and really didn't help prevent deaths, and in fact crashed the economy. I don't believe that, but even if all that were true, the governmental directives that were adopted do not signify the "near abolition of freedom," as Tucker contends. In fact, those programs, representing our political choices, exemplify exactly how "freedom" really operates.
The kind of "freedom" upon which our government, economy, and society is based is the freedom that guarantees us an ability to govern ourselves. And "ourselves, let's remember, is plural, not singular.
Democratic self-government - and the "freedom" that is associated with self-government - doesn't mean that every individual gets to do what she or he wants, without penalty.
Let's not forget that!
To Subscribe Just Click This Link
Image Credit:
https://homeschoolingforcollegecredit.com/2019/07/10/christian-moocs-hillsdale-college/