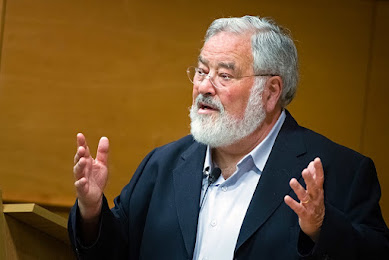 George Lakoff, pictured, is described by Wikipedia as "an American cognitive linguist and philosopher, best known for his thesis that people's lives are significantly influenced by the conceptual metaphors they use to explain complex phenomena."
Let me try to make this somewhat abstract statement more concrete. Lakoff claims that how we "frame" a political or economic proposal is often determinative, and will decide whether or not a proposed action can gain acceptance and become a reality. Consider, for instance, Lakoff's celebrated book, Don't Think Of An Elephant. The book is subtitled, "Know Your Values and Frame the Debate -- The Essential Guide for Progressives." In its description of the book, Amazon provides this pitch, urging us to purchase a copy:

Don't Think of an Elephant! is the definitive handbook for understanding what happened in the 2004 election and communicating effectively about key issues facing America today. Author George Lakoff has become a key advisor to the Democratic party, helping them develop their message and frame the political debate.

In this book Lakoff explains how conservatives think, and how to counter their arguments. He outlines in detail the traditional American values that progressives hold, but are often unable to articulate. Lakoff also breaks down the ways in which conservatives have framed the issues, and provides examples of how progressives can reframe the debate.

Lakoff's years of research and work with environmental and political leaders have been distilled into this essential guide, which shows progressives how to think in terms of values instead of programs, and why people vote their values and identities, often against their best interests.

Don't Think of An Elephant! is the antidote to the last forty years of conservative strategizing and the right wing's stranglehold on political dialogue in the United States.

I think it is fair to say that "progressives" have largely accepted the idea that "framing" the issues is key, and that finding the right way to frame the issues is how they can best gain acceptance for their progressive policy proposals.
Not to dispute Lakoff's insight in this matter, it seems also worthwhile to consider the idea that "progressives" need to build their case for their policy proposals on the "facts," and not just "framing."
This is the argument presented in a recent Huffington Post article on Aaron Belkin. That article is titled, "How Progressives Can Win The Long-Term Fights They're Losing." Author Jonathan Cohn says that by restricting its efforts to "framing" the debate, progressives are playing "small ball":

As Belkin tells the story, a chronic problem for Democrats and their allies has been their focus on winning debates through better rhetoric. They assume public opinion is relatively static, and think the key to victory in any given argument is picking the right words or trying to shift the focus of conversation, so that the debate can take place on more favorable political grounds.

This advice makes plenty of sense in certain contexts, Belkin says. But one of his core principles is that too much focus on language and framing can limit the prospects for reform, by giving up on the possibility of changing minds over time.

“As long as we emphasize frame over facts,” Belkin said in a recent interview with HuffPost, “we’re going to be playing small ball.”

I am inclined to believe that "facts" will beat "framing" every time, when it comes down to real changes to public policy. Members of the public may well begin to be disillusioned if they sense that they are being asked to approve policy proposals that are well-articulated, well "framed," but that those who are advocating for the proposals are more interested in "framing" how a proposal is presented, instead of demonstrating why the proposal is right, based on the "facts."
Great "salespersons" can "sell" their product, because they are so great at "framing" the arguments. But is that product, in the end, actually good? I think it's fair to say that voters and members of the public tend to discount political arguments, and to consider them to be political "sales jobs," because they don't really believe that the great "framing" provided for these proposals are truly reflective of the facts.
Check out Cohn's article. It's worth thinking about!
To Subscribe Just Click This Link
Image Credit:
https://medium.com/the-beautiful-voyager/great-advice-from-george-lakoff-4d684acdc200