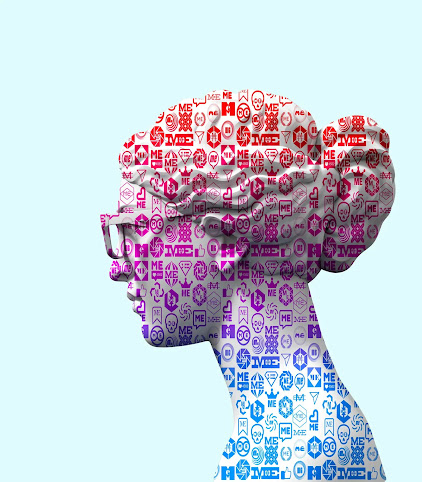 The New York Times ran an article that was titled as follows, in the October 23, 2022, hard copy edition: "Sick and Tired of Me Inc." Online, as is so often the case, there is a completely different title: "Burned Out On Your Personal Brand." That's the headline you will see if you click that link, above.
The article, which runs to a full page and one half in the hard copy version, outlines the downsides of deciding to make one's living by becoming a social media "content creator." That's a real job, nowadays, as is the job of helping people to become a social media content creator.
As might be expected, The Times' article contains lots of specific examples of how the initially attractive task of promoting oneself to millions of strangers ends up not being quite as satisfying or enjoyable as the various content  creators thought it would be.

Kahlil Greene has built his brand as "the Gen Z historian,"and has over 500,000 followers on Tik-Tok. "There is no clear delineation between my work life and my personal life," he told The Times. "Sometimes it can be exhausting."

Jesse Israel, who lives in Los Angeles, has "a mindfulness brand." He told The Times about a "period of loneliness, illness and career instability," in which his social media work undermined his mental health.

Alexa Heller, "a millennial who built a yoga teacher brand," felt that she should be totally candid with her followers on Instagram. "She posted about making efforts to stay celibate, taking months off from sex and dating." She also disclosed "the insecurities bred by her acne." As Heller amassed thousands of followers, she felt "the angst of compressing every strand of her personality, from the professional to the highly personal, into a single persona." She has since gone into real estate.

Kanchan Koya, whose brand is "Chief Spice Mama," has accumulated over 230,000 Instagram followers, but when she is "superhonest," Koya admits that "if my business wasn't intertwined with my social media presence, I would be on it 90 percent less. I just don't feel like it's natural for us as humans to have so many people in our lives."

I think Koya is right that it isn't "natural" to have 230,000 or more people "in one's life." In fact, though, I would like to ask the question whether one's followers on a social media platform are really "in one's life" at all.
I also want to suggest that the kind of relentless self-promotion required of social media content creators is similarly "unnatural," and is quite likely to lead to the kind of mental health issues experienced by Jesse Israel.
Besides yoga, cooking, mindfulness, and social commentary, of course, "politics" is another area in which various social media content creators are trying to establish themselves as "pundits," or "commentators," or "rabble-rousers," or in some other way to claim both credentials and a following.
Since I think I do know something about politics, here is some advice. If anyone is genuinely interested in practicing politics effectively, I recommend real life interactions with real people, carried out through in-person meetings, and in small groups. Margaret Mead, in other words, the American anthropologist, continues to provide us good advice:

Never doubt that a small group of thoughtful, committed, citizens can change the world. Indeed, it is the only thing that ever has.