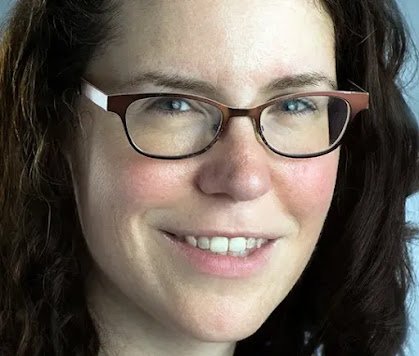 The picture above is of Megan McArdle, an opinion writer for The Washington Post. I much enjoyed her column published on October 26th, which discussed the role that anger plays in our political lives:

Much like cocaine or methamphetamine, anger provides a dopamine rush that feels terrific and distracts us from petty anxieties or persistent ennui. It’s also a good way to bond with your fellow partisans. So readers cruise both regular and social media looking for reasons to get angry. I’m afraid we oblige them to an unhealthy degree.

Getting "angry," in other words, is a way to feel good. A politics built on anger comes with a built-in "good feeling" reward. I think there is a lot to what McArdle says.
Yesterday, I cited to a discussion about the views of Tim Robbins, who is concerned about how we might find a politics that would "bring us together." McArdle has the same concern.
After diagnosing why we seem determined to be politically divided (it's that dopamine rush), McArdle says that direct personal contact with those with whom we disagree can dissolve the divisions that seem so real (and rewarding). She tells a very nice story about how she experienced this personally when she recently attended a Donald Trump rally in Arizona. For those not closely following the pronouncements of our former president, he definitely does not like The Washington Post. Neither do his partisans. However:

In Mesa, Ariz., for a Trump rally earlier this month, I was surrounded by a crowd that booed and jeered the media on Trump’s cue — then turned around and pleasantly did its best to help me get back into the reporters’ pen, through a packed scrum with barely room to breathe. The same people who had been catcalling the liars in the “fake news” just moments before commiserated over the crowd and heat and urged their neighbors to let me through.

When we are interacting at a distance, particularly through social media, we can revel in our anger. When we meet others in person, not so much. McArdle, in fact, is making the exact same point that Robbins is making. Here is her concluding thought:

We’re accustomed to the idea that people often fail to live up to their ideals in their personal lives — talking a good game about antiracism while angling to keep their kids in majority-White schools. But the same can be true of our less lovely emotions. In abstract, we might be angry or fearful, while in particular being friendly and decent to the person in front of us.

So my most optimistic scenario is that remote work will help bring us back together, by reversing some of the economic forces that have been pulling us apart, sorting us by education and politics into the booming coastal megacities and the places that feel they’ve been left behind — or worry they soon will be. Maybe when we’re standing next to each other, we’ll be surprised to find that we get along just fine.

I don't buy the idea that "remote work" is the way to bring us back together, precisely because "remote" work is just that, "remote," and we need to foster arrangements that have us "standing next to each other." I think Robbins is correct that what we actually need is to be in personal contact with others (with whom we may well disagree, politically). "Personal contact" means that you could actually "reach out and touch someone."
Real, physical proximity to other persons, in "real life," is going to require that we start "talking to strangers." That will have its own "good feeling" reward.
Do we really need to remind ourselves that authentic human contact feels good (hasn't that been your experience, too?).
Anger is not the only way to get that "dopamine rush."
To Subscribe Just Click This Link
Image Credit:
https://www.starnewsonline.com/story/opinion/columns/your-voice/2019/01/13/opinion-megan-mcardle-who-should-decide-what-topics-are-off-limits/6309483007/