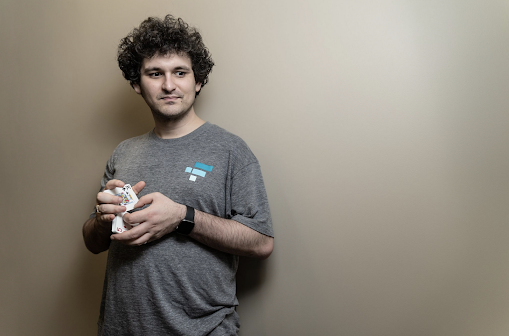 Maybe someday you will understand
That something for nothing is everybody's plan
Bob Dylan, "Maybe Someday"
The individual pictured at the top of this blog posting, Sam Bankman-Fried, travels by his initials alone: SBF. In this, he is not unlike a certain murderous Saudi potentate, congenially known as MBS.
The picture above was obtained from an article, online, in The Wall Street Journal, which makes clear that Bankman-Fried is really, really sorry for losing billions of dollars of other people's money. In the hard-copy version of the paper, a November 10, 2022, tweet from Bankman-Fried is superimposed on the picture. Here's the tweet: "I'm sorry. That's the biggest thing."
Bankman-Fried ran FTX, a cryptocurrency exchange, and raised a prodigious amount of money from people who should have known better. As it turned out, the money SBF was raising was not, in fact, being used for what he said it would be used for. Instead, the money was used by him to speculate, acting through through another company he controlled, Alameda Research, whose CEO, Caroline Ellison, age twenty-eight, was in a romantic relationship with him. Bankman-Fried, Ellison, and other FTX insiders lived a drug-fueled, high life in the Bahamas, where both of these companies were based. Although he apologized to investors, after taking FTX into bankruptcy, it appears that SBF is withdrawing his statement of regrets about that.
If readers of this blog posting can penetrate the likely WSJ paywall, The Journal's article on Bankman-Fried is quite instructive. Not to mention fascinating. It's titled, "They Lived Together, Worked Together and Lost Billions Together: Inside Sam Bankman-Fried’s Doomed FTX Empire." The article is way too long to reproduce here, but here is how the article starts off, to give you the flavor:

NASSAU, Bahamas—Sam Bankman-Fried’s $32 billion crypto-trading empire collapsed in an incandescent bankruptcy last week, prompting irate customers, crypto acolytes and Silicon Valley bigwigs to ask how something that seemed so promising could have imploded so fast.

The emerging picture suggests FTX wasn’t simply felled by a rival, or undone by a bad trade or the relentless fall this year in the value of cryptocurrencies. Instead, it had long been a chaotic mess. From its earliest days, the firm was an unruly agglomeration of corporate entities, customer assets and Mr. Bankman-Fried himself, according to court papers, company balance sheets shown to bankers and interviews with employees and investors. No one could say exactly what belonged to whom. Prosecutors are now investigating its collapse.

Mr. Bankman-Fried’s companies had neither accounting nor functioning human-resources departments, according to a filing in federal court by the executive brought in to shepherd FTX through bankruptcy. Corporate money was used to buy real estate, but records weren’t kept. There wasn’t even a roster of employees, to say nothing of the terms of their employment. Bankruptcy filings say one entity’s outstanding loans include at least $1 billion to Mr. Bankman-Fried personally and $543 million to a top lieutenant.

The lives of the people who ran FTX and its related companies were similarly blurred. Ten of them lived and worked together in a $30 million penthouse at an upscale resort in the Bahamas. The hours were punishing, and the lines between work and play were hard to discern. Romantic relationships among Mr. Bankman-Fried’s upper echelon were common, as was use of stimulants, according to former employees.

Mr. Bankman-Fried, 30 years old, kept a hectic schedule, toggling between six screens and getting by on a few hours of sleep a day. He was at times romantically involved with Caroline Ellison, the 28-year-old CEO of his trading firm, Alameda Research, according to former employees.

“Nothing like regular amphetamine use to make you appreciate how dumb a lot of normal, non-medicated human experience is,” Ms. Ellison once tweeted. A lawyer for Ms. Ellison declined to comment (emphasis added).

Back at the beginning of the high-tech boom, the popular press started calling people like Bankman-Fried "Masters of the Universe." Financial Review, for instance, headlined one of its articles as follows:  "In Silicon Valley, the new masters of the universe think they know best."
Rich people seem smarter, right? If they weren't smarter, they wouldn't be rich, right?
Let's all understand that the so-called "Masters of the Universe" aren't any smarter or better than the rest of us. Usually not smarter! At least, they're not smarter about the things that matter most. Crypto-currency, for instance, is - and has been from the start - just a mechanism for speculation, pretty much pure and simple.
Shame on us if we have suppressed our own intelligence, hoping to get "something for nothing."
And we might apply the "Masters of the Universe" lesson to Mr. Elon Musk, too. Is he rich? Yes! But he is now on a course that might well destroy Twitter, a recent business acquisition, while he continues to try to get the United States taxpayers to subsidize his absurd notion that we can escape our responsibility for taking care of Planet Earth by heading off to a life on Mars!
Whenever it's "something for nothing," and whenever it seems "too good to be true," it's almost certainly not true. So let's be smart enough, ourselves, to remember that and not lose our life's savings by giving our money away to those "tech bros," and "money guys," who seem to know exactly what they're doing.
They're rich, right? They must know what they're doing. Oh, Yeah! And maybe they do know. Maybe they are absolutely, fully aware that they are stealing us blind.
But hey: Sorry, guys! I am really, really sorry!
To Subscribe Just Click This Link
Image Credit:
https://www.wsj.com/articles/sam-bankman-fried-ftx-alameda-bankruptcy-collapse-11668824201