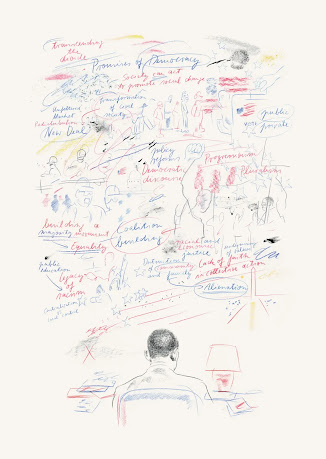 It turns out that Barack Obama, working with a friend, wrote the first draft of a book, while both Obama and his friend were students at Harvard Law School. If you can beat The Times' paywall, you can read about that book by clicking right here. The story in The Times is by Timothy Shenk, and Obama's manuscript book was titled, "Transformative Politics."
Shenk is a history professor, and has recently published a book called, Realigners, in which Shenk discusses the Obama manuscript. Apparently, Obama's friend, with whom Obama wrote the never-published book, is named Robert Fisher. Shenk identifies Fisher as "an economist," but if you click that link to his name, you will see that Fisher actually seems to be more of an "attorney," though an attorney specializing in economic matters. Currently, Fisher is an adjunct professor at the Raymond A. Mason School of Business, located at William & Mary University, and also serves as Senior Special Counsel to the Director of the Examinations at the US Securities and Exchange Commission (SEC).
Well, what was the Obama-Fisher prescription for a "transformative politics"? That's the real question, it seems to me. We could certainly use some of that "transformative politics," at least I think so, and it doesn't look to me like the Obama presidency ever delivered any such thing.
According to Shenk, the lost manuscript, which he says demonstrated a "fiery brilliance," was "shaped by Obama's years as a community organizer in Chicago":

Mr. Obama directed his fire across the entire political spectrum. He denounced a broken status quo in which cynical Republicans outmaneuvered feckless Democrats in a racialized culture war, leaving most Americans trapped in a system that gave them no real control over their lives. Although his sympathies were clearly with the left, Mr. Obama chided liberals for making do with a “rudderless pragmatism,” and he flayed activists — with the civil rights establishment as his chief example — for asking the judiciary to hand out victories they couldn’t win at the polls. Progressives talked a good game about democracy, but they didn’t really seem to believe in it.

Mr. Obama did. With the right strategy, he argued, Democrats could engineer a political realignment that would begin a new chapter in the country’s history....

Written during Mr. Obama’s final semester, the manuscript updated Bayard Rustin for the age of Ronald Reagan. Mr. Obama and Mr. Fisher’s plan hinged on recruiting blue-collar whites back into a reborn version of the March on Washington coalition. According to Mr. Obama and Mr. Fisher, these votes could be won over with a platform that appealed to both the values and the material interests of working people. That meant shifting away from race-based initiatives toward universal economic policies whose benefits would, in practice, tilt toward African Americans — in short, “use class as a proxy for race.”....

Mr. Obama rejected the idea that appealing to Reagan Democrats required giving in to white grievance. Chiding centrists at the Democratic Leadership Council — headed at the time by Gov. Bill Clinton of Arkansas — he warned against retreating in the battle for civil rights. Moderates scrambling for the middle ground were just as misguided, he argued, as antiracists implicitly pinning their hopes on a collective racial epiphany. Neither understood that bringing the conversation back to economics was the best way to beat the right. Instead of trimming their ambitions to court affluent suburbanites, Democrats had to embrace “long-term, structural change, change that might break the zero-sum equation that pits powerless blacks [against] only slightly less powerless whites.”

You might think it’s strange to hear Mr. Obama sounding like he’d just come from a meeting of the Democratic Socialists of America. But even though his days as a GQ Marxist were in the past, he brought an appreciation for class politics with deep roots on the left into the next phase of his career.

All the pieces of Mr. Obama’s plan fit together: an electoral strategy designed to make Democrats the party of working people; a policy agenda oriented around comprehensive economic reform; and a faith that American democracy could deliver real change. By mixing political calculation with moral vision, Democrats could resurrect the March on Washington coalition and — finally — transform politics.

Regrettably, it seems to me, when Obama had a real chance to try out his theory, and to "transform" American politics, he flinched. The 2007 - 2009 economic meltdown that has been called the "Great Recession," which was brought on by the bursting of the "housing bubble," was the perfect time to make clear to the American people that comprehensive economic reform was needed. Instead, Obama bailed out the big banks, and millions of Americans lost their homes, and the economic value that constituted all they had. Obama, of course, has progressed from being a "GQ Marxist" (Shenk's term) to being a "GQ Capitalist," with both Obama and his wife joining the list of the truly wealthy.  The Insider article I have just cited, now two years old, notes that the Obamas do "donate to charity" with their millions, but this is not the same thing as working for a new political coalition aimed at ending the economic inequality that is the defining feature of our current economy and society.
I think that the Obama-Fisher proposal has a lot of merit. Maybe, Obama "flinched," as I have said above, or maybe not. Maybe the fact that Obama never actually published his book demonstrates that he actually was less interested in transforming American politics than he was in advancing himself personally. Who knows? I voted for Obama enthusiastically, but became disappointed. Bernie Sanders is the American politician who is actually trying to carry out the Fisher-Obama program to "transform" our politics.
I have another factor to add into the political prescription advocated in the Barack Obama-Robert Fisher draft. Besides making clear to the American people that we need a politics that provides economic rewards to everyone, since everyone is helping to "Make America Great," I suggest that our politics needs to communicate to ordinary men and women around the nation - the working families that support our nation - that THEY own the government (not vice versa). The appeal of Donald Trump to the white working class voters who make up so much of his "base" reflects the fact that the very component of our society that Obama said had to be mobilized to change our governmental policies is, in fact, quite ready to do just that.
Too bad the appeal to which this group is responding is an appeal to a totalitarian, not a democratic approach.
Transformative politics? I think it's a lot like what Gandhi may, or may not, have said about Western Civilization.
I think it would be a good idea!
To Subscribe Just Click This Link
Image Credits:
https://www.nytimes.com/2022/10/07/opinion/obama-lost-book-manuscript.html