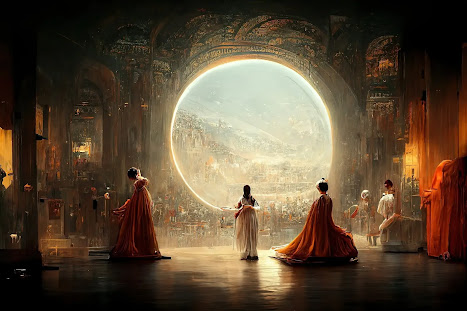 The artwork pictured above, titled “Théâtre D’opéra Spatial,” was "created" by Jason M. Allen, of Pueblo West, Colorado. I have put quotation marks around the word "created" to signal the fact that Mr. Allen's piece, which took home a blue ribbon in the Colorado State Fair's annual art competition, was created by "typing in some words" to an artificial intelligence art creation program called Midjourney. Click on that link and maybe you can create some art, too.
What words did Mr. Allen type into the program? He won't tell. You can get the whole story (paywall protections permitting) by reading Kevin Roose's article in The New York Times. In the hard copy edition of the paper, Roose's article is titled, "Creating Art By Typing In Some Words." Another, later article by Roose lets us know that "creative professionals" are eagerly utilizing these new, A.I.-enhanced tools. And "creative professionals" aren't the only ones embracing the technology. The Times lets us know that this new variety of artistic creation may have found its moment. "Tech luminaries" and "venture capitalists" are ecstatic about this new technology, which has been denominated "Generative-A.I."
Mr. Allen, though, has been accused of "cheating" by other artists. He is neither ashamed nor abashed. However it was created, the image is striking. That's what Mr. Allen argues, and perhaps we can all agree on that.
But who should get the credit when the person who claims to be the "artist" accomplishes the work of artistic creation by "typing in some words" to a computer program developed by someone who is not the "artist?" In the online version of The Times' article, the headline reads as follows: "An A.I.-Generated Picture Won an Art Prize. Artists Aren’t Happy."
Maybe that headline about that prize-winning piece of A.I.-Generated art should have read: ".... REAL Artists Aren't Happy."
The story about Allen's artistic creation, besides providing me an interesting discussion topic for my class on "Privacy, Technology, And Freedom," raises a fascinating question: Is Allen's computer-generated creation "Real Art?"
Check out that Midjourney website. See what you can do. Type in some words. Get a result. Are you an artist now?
To Subscribe Just Click This Link
Image Credit:
https://www.nytimes.com/2022/09/02/technology/ai-artificial-intelligence-artists.html