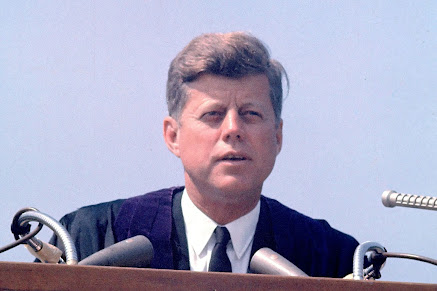 Peggy Noonan, former speechwriter for Ronald Reagan and now a columnist for The Wall Street Journal, wrote a column published by The Journal in its Saturday-Sunday, October 1-2, 2022, edition. That is where I picked up the picture of President John F. Kennedy that I am featuring above. Noonan's article is entitled, "Enduring Lessons of the Cuban Missile Crisis."
We are now facing another crisis involving the possibility that Russia and the United States might engage in atomic war - as was the case in the Cuban Missile Crisis. Once again, the threat of a nuclear exchange, involving Russia and the United States, is placing the future of human life on Earth in jeopardy. Noonan's recent commentary is certainly timely, and here is something she said in her column:

America and the Soviet Union are “almost unique among the major world powers” in that “we have never been at war with each other.”

In fact, in World War II, the United States and the Soviet Union were allies. Somehow, the United States has come to believe that it was the United States (pretty much alone) that was mainly responsible for defeating Hitler's effort to dominate Europe, and perhaps the world.
We certainly did a lot, but the Soviet Union more than matched us in its commitment, particularly in lives lost. The United States lost a little more than 400,000 lives in helping to defeat Nazi Germany. The Soviet Union lost over 20,000,000.
Let me reemphasize what Noonan said, but again stating the matter positively. In "the deadliest military conflict in history," Russia and the United States were, not only not "at war with each other," we were allies!
My oft-repeated statement, applicable to human life, and politics, in general, and in almost every circumstance, is worth repeating in the context of international relationships, including those between the United States and Russia: We are "in this together." In short, we are "allies."
Citizens of the United States should not stand by and allow our "leaders" to give the impression that we can "deal with" an atomic attack by Russia, if it comes to that. All of the peoples of the world are allies in what must be our common effort to eliminate, ever, the chance that nations will use atomic weapons against one another, ever again.
It should be our shame, as citizens of this country, that it was the United States, and no other nation, that used atomic weapons against another nation, not only once, but twice.
Never again.
Let us use our influence, and the wealth of our nation, not to provision more war in Europe, but to call upon what brings together all the peoples of the world. Poverty, economic inequality and uncertainty, and global warming threaten everyone alive today, in every nation. They threaten, also, those who have yet to be born, and we must all be allies in confronting those common dangers.
Let me end with a longer quote from Noonan's column, repeating as I do what I have already quoted above:

The nature of war has changed.... We can’t continue with great powers having huge nuclear arsenals and possibly resorting to their use: “A single nuclear weapon contains almost 10 times the explosive force delivered by all the allied air forces in the Second World War.” A major nuclear exchange could extinguish the world.

To believe peace is impossible is to believe war inevitable, and if that is so then mankind is doomed. “We need not accept that view.” No government is so evil that its people must be considered as lacking in every virtue. America and the Soviet Union are “almost unique among the major world powers” in that “we have never been at war with each other” (emphasis added).

Russia and the United States are, today, as we have been in the past, allies in all that is most important to the future of our human world. Let us demand that we work, as allies, and not risk a "major nuclear exchange [that] could extinguish the world."
To Subscribe Just Click This Link
Image Credit:
https://www.wsj.com/articles/enduring-lessons-of-the-cuban-missile-crisis-russia-ukraine-nuclear-weapons-world-war-iii-reagan-jfk-speech-history-war-11664486986