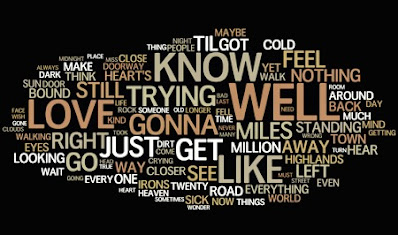 Time passes slowly up here in the daylight
We stare straight ahead and try so hard to stay right
Like the red rose of summer that blooms in the day
Time passes slowly and fades away.
- Bob Dylan
The "Word Cloud" image at the top of today's blog posting was generated in relation to words that are prominent in Bob Dylan's 1997 album, "Time Out Of Mind." In fact, though, my blog posting today (beyond the title) was stimulated not so much by Bob Dylan's album as by Maria Popova's "Sunday Newsletter" blog, The Marginalian.
I find Popova's weekly postings to be mind-expanding. Formerly, they came to readers under the title, "Brainpickings," and I suggest that anyone who is reading my own blog should check her out. You already know you should be checking out Bob Dylan!
Please consider today's blog posting as a compendium of references to the subject of "Time," with these references having been identified by Popova. I hope these references will be helpful to some who might read this - and maybe they will be - but the items listed here provide way too much to read in a day (or maybe a lifetime). I do realize that. So, right here, as you can see, I have just documented a standard, time-related complaint. No matter how much "Time" we've got, there just isn't enough of it!
Popova, who is characterized by Wikipedia as "a Bulgarian-born, American-based essayist, book author, poet, and writer of literary and arts commentary and cultural criticism," has written frequently about "Time." I keep wondering about "Time" myself, and "Time" keeps coming up in my own blog postings. Mostly, as in my "Trucker Time" blog posting, I end up referencing what George Fox, the first Quaker, had to say about "Time."
You have no time but this present time; therefore, prize your time for your soul's sake.
I continue to think that Fox's observation is perhaps the most important thing we can know about "Time," and I was thus quite gratified when I learned that what George Fox has to say about "Time" is very much consistent with what Hannah Arendt has to say about "Time" in her wonderful book, Between Past And Future.
Popova, however, does provide some additional insights, beyond George Fox, and even beyond Hannah Arendt (though Arendt does make Popova's list as an important commentator on the subject of "Time").
I am providing, below, a set of links to some of what Popova has had to say about "Time," and each one of Popova's discussions contains many more references than those I highlight:

In October 2011, Popova links us to a BBC commentary on "Time" by theoretical physicist Michio Kaku, who concludes that "the more we understand time, the more we find that it is time that makes us uniquely human," and that "time is the greatest force in our lives." You'll have to watch the entire BBC series if you want to understand exactly why Kaku makes those claims, but the essence appears to be a claim that "Time" is hardwired into our biology, and that what is called our "circadian rhythm" is fundamental to our existence. A review in a recent edition of The Wall Street Journal cites to a new book, Life Time, which apparently substantiates this claim. Beyond this "biological" approach to understanding "Time," Popova provides us with suggestions for further reading. She advises that there are seven "must read" books about time, and names them, thus: (1) A Brief History of Time, by Stephen Hawking; (2) From Eternity to Here: The Quest for the Ultimate Theory of Time, by physicist Sean Carroll; (3) Time, by artist Andy Goldsworthy; (4) Cartographies of Time, by Princeton professor Anthony Grafton; (5) Time: A Graphic Guide, by Craig Callender; (6) The Time Paradox: The New Psychology of Time That Will Change Your Life, by Philip Zimbardo; and (7) The Thief of Time: Philosophical Essays on Procrastination, by Chrisoula Andreou and Mark D. White.

In July 2013, Popova discusses why "Time Slows Down When We're Afraid, Speeds Up as We Age, and Gets Warped on Vacation." Popova directs her readers to yet another book, Claudia Hammond's Time Warped: Unlocking the Mysteries of Time Perception. Hammond is a British author, TV presenter, and frequent radio presenter with the BBC World Service and BBC Radio 4, and she advances the idea that our experience of "Time" is actively created by our own minds, and that "Time," thus, is not something that exists independently.

In October 2014, Popova turns to Galileo, and tells us how well Steven Johnson has documented Galileo's thoughts about "Time" in Johnson's book, How We Got To Now: Six Innovations That Made The Modern World. Galileo's contribution? The invention of the pendulum clock, a hundred times more accurate than any preceding technology, which soon became a staple of European life and forever changed our relationship with time.

In March 2015, Popova talked about the writer Sarah Manguso, and celebrated Manguso's insight that the nature of "Time" is to be "ongoing," which means, inevitably, that "Time" escapes us, and that we forget the past. However irritating or infuriating it is to have forgotten even the most important parts of our life (and I definitely have experienced this frustration), Manguso counsels us to revel in this forgetfulness, and to understand that "the forgotten moments are the price of continued participation in life, a force indifferent to time."

In May 2015, Popova discusses "Time" in connection with Virginia Woolf, and particularly in connection to Woolf's novel, Orlando. Woolf, Popova says, understood the "elasticity" of "Time." Duration, surely one of the most salient aspects of "Time" as we typically think of it, is subjectively malleable: "An hour, once it lodges in the queer element of the human spirit, may be stretched to fifty or a hundred times its clock length; on the other hand, an hour may be accurately represented on the timepiece of the mind by one second."

In another posting in May 2015, Popova points out that the kind of "subjective" experience of "Time" that she discussed in connection with Woolf is not the whole story. In fact, Popova asserts, "however convincing our intuitive sense that time is a mutable abstraction shaped by the subjective grab-bag of attributes and experiences we call the self, there remains the empirical nature of time as a measurable, observable, concrete dimension of reality — and the rift between these two conceptions of time is one of the most disorienting yet fascinating aspects of existence." Popova cites to both Albert Einstein and Kurt Gödel as those who describe "Time" as a "concrete dimension of reality," and recommends a book by Rebecca Goldstein as a way to learn more about this aspect of "Time," Incompleteness: The Proof and Paradox of Kurt Gödel.

In December 2015, Popova features Hannah Arendt's thoughts "On Time, Space, and Where Our Thinking Ego Resides." As already indicated, I think Arendt has valuable insights about how "Time" is related to the "Political World" in which we most immediately live. Popova alludes to the "gap" in "Time" that is discussed extensively in Between Past And Future, but Popova wants her readers to engage with Arendt's final major work, too, The Life of The Mind, which Popova calls "one of the most stimulating packets of thought ever published."

In May 2016, Popova explores the thought of Bertrand Russell, whom Popova calls "a thinker of rare genius." In his book, Mysticism and Logic and Other Essays, Russell is seeking to decide whether a "mystical" or a "logical" view of reality will best help us understand the world. Both perspectives, he concludes, are required, and Popova points to "Russell’s discussion of "Time" and the question of whether or not it is real — perhaps the greatest friction point between science and metaphysics" - as the most important topic that Russell addresses within his overall exploration of the nature of reality: "With an eye to the mystics’ assertion that linear time is an illusion," Russell writes, "it is difficult to disentangle the truth and the error in this view. The arguments for the contention that time is unreal and that the world of sense is illusory must, I think, be regarded as fallacious. Nevertheless there is some sense — easier to feel than to state — in which time is an unimportant and superficial characteristic of reality. Past and future must be acknowledged to be as real as the present, and a certain emancipation from slavery to time is essential to philosophic thought."

In September 2016, the last reference I am providing here, Popova refers us to the thinking of Jorge Luis Borges, and particularly to his 1946 essay, "A New Refutation of Time," which is found in Borges' book, Labyrinths: "Borges begins by noting the deliberate paradox of his title, [which is] a contrast to his central thesis that the continuity of time is an illusion, that time exists without succession and each moment contains all eternity, which negates the very notion of “new.” The “slight mockery” of the title, he notes, is his way of illustrating that “our language is so saturated and animated by time.” Popova ends her presentation of Borges' thoughts on "Time" as follows, quoting Borges' assertion that "Time" plays a determinative role in the definition of our reality: "Denying temporal succession, denying the self, denying the astronomical universe, are apparent desperations and secret consolations. Our destiny … is not frightful by being unreal; it is frightful because it is irreversible and iron-clad. Time is the substance I am made of. Time is a river which sweeps me along, but I am the river; it is a tiger which destroys me, but I am the tiger; it is a fire which consumes me, but I am the fire. The world, unfortunately, is real; I, unfortunately, am Borges."

oooOOOooo
I have not, of course, read all the references provided here, and even if I had - even if I had read all of the references in all of Popova's various postings - I am not sure that I would really be able to explain or define "Time."
It looks to me like my own lack of understanding is not atypical, either, which makes me  think that I should mention what Augustine had to say on the subject: "What then is time? If no one asks me, I know what it is. If I wish to explain it to him who asks, I do not know."
The fact that we know what "Time" is, until we are challenged to explain it, is why I return, always, to what George Fox said about "Time." We can relate to the world as both "observers," and as "actors," as I am fond of noting, and trying to define and describe "Time" is a task of observation. That is the task that those who are mentioned by Popova have undertaken to accomplish.
Trying to understand "Time" by observing it, and by trying to define "Time," based on our observations, ends up in deflecting us from what is, really, a more a worthwhile activity. In the end, we make the world by what we "do," not by what we have "observed," or by what we "know," based on those observations.
So, to return to Fox, we have no "Time" but this very instant in which we are now living - the "right now." Because this is, in fact, the truth of our human situation, it is our "NOW" that is most precious, for it is right here, in that "gap" between the "Past" and the "Future" that Arendt has identified, that we have an opportunity, by acting, to help create the world - the reality - in which we live - and the reality in which will live, too.
Make no mistake, if we are to have a future, it will only be because we act...
Right now.
To Subscribe Just Click This Link
Image Credit:
https://i.grahamenglish.net/1674/time-out-of-mind/