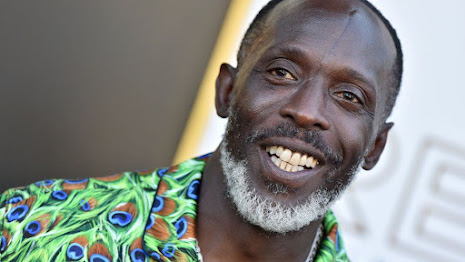 Pictured above is Michael K. Williams, an American actor who was critically acclaimed for his role as Omar Little on the HBO drama series The Wire. Williams died in September of 2021, and is remembered as "a fine man and a rare talent."
I was struck (and, in fact, inspired) by an article that appeared in the August 21, 2022, edition of The New York Times. The article was titled, "An Actor's Unfinished Mission: To Heal Brooklyn." The article documents efforts by Williams, and others, to make Black communities safe from violence. The Times calls Williams' efforts his "true legacy," and describes these efforts as follows:

Toward the end of his life, Mr. Williams devoted himself to making Brooklyn’s Black communities safer. He pursued this mission, in part, by helping build a model for organizing that he hoped would eventually inspire a national movement. Through this initiative, called We Build the Block, he and the other organizers held “block activations” throughout Brooklyn, culminating in the mayoral summit in Brownsville [described in The Times' article]. Teenage activists would engage their neighbors in conversations about the political process and register them to vote. The group deliberately chose blocks that the police regarded as gang strongholds, while persuading the police, remarkably, to stay out of the way. “It was a way to say we can take care of our own,” Mr. Williams wrote in his memoir. None of these events, as he noted, were ever disrupted by violence.

Person to person contact, in "real life," on a small scale, and not by way of some social media effort, is what is being described. "Building the Block," using these person-to-person, real life contacts, is the same thing as building "community," and it works in any neighborhood, anywhere.
"Building the Block," in fact, is a prescription for the only kind of "politics" that will ever, really, work to make significant, substantial, and enduring political change. There isn't any shortcut.
You and I can do it, too, wherever we live. Maybe, this is exactly the kind of activity where we might "find our vocation at a spot where our deep gladness meets the world's deep needs," to quote Frederick Buechner from my blog post yesterday, "What To Do With Your Life."
It's worth a try!
To Subscribe Just Click This Link
Image Credit:
https://www.bbc.com/news/world-us-canada-58470253