The Wall Street Journal has a special section, appearing in its Friday editions, that it calls, "Mansion." The picture above appeared in the "Mansion" section of The Journal on Friday, August 19, 2022. It depicts a home owned by tech billionaire Larry Ellison, located in North Palm Beach.
For those in the market for this kind of a place, The Journal tells us that Ellison was offering the property for sale at $145 million. A year earlier, Ellison bought the property for $80 million. Thus, Ellison was anticipating a rather tidy gain on his investment of $65 million, which is about an 80% increase in value in just one year.
The Ellison home pictured looks like a pretty nice place to live doesn't it? In fact, though, The Journal suggests that Ellison's $145 million North Palm Beach property is actually a "tear down."

Located in the Seminole Landing gated community, the North Palm Beach property sits on about 8.5 acres, including a privately owned beach and dune, with over 520 feet of ocean frontage, according to the listing agents. It is one of the largest oceanfront plots in Palm Beach County, and one of a handful of Florida properties where someone could land and take off in a helicopter, according to Adam McPherson of Douglas Elliman, one of the listing agents. The Tuscan-style house has seven bedrooms, a home theater and a wine room. The property also includes a tennis court.

While the existing home has “good bones,” Mr. McPherson said most buyers will likely want to expand the house or raze it and build a larger home from scratch (emphasis added).

On August 18th, The Journal featured another "Mansion," this one a New York apartment owned by Janet Jackson. Jackson's apartment was sold for $8.8 million, a far cry from Ellison's $145 million. Moreover, Jackson had owned the property for twenty-five years, having purchased it in 1998 for $2.8 million. Jackson realized a 214% increase in value - but that's only an increase in value of 8.6% per year. Still, a pretty decent return on her investment. No bank could have given an investor that kind of interest.

Just to be fair, as we talk about "Mansions," here's a picture of some lower-end housing in Santa Cruz, California. Regular readers of this blog will perhaps remember that I have published pictures of this particular housing development before: 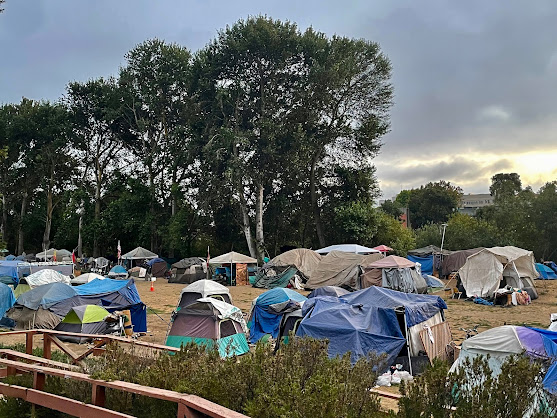 If we are, in fact, "in this together," as I repeatedly claim, then the kind of wealth inequality that is illuminated by these photos is a profound indication that we need to rearrange the economic, social, and political realities that have brought us to our current situation.
Unfortunately, you are not going to read about how we might do that in The Wall Street Journal. Consider some other sources!
To Subscribe Just Click This Link
Image Credits:
(1) - https://www.wsj.com/articles/larry-ellison-lists-florida-estate-for-145-million-11660661937
(2) - https://www.wsj.com/articles/janet-jackson-sells-new-york-apartment-for-8-8-million-11660839787
(3) - Gary Patton personal photo