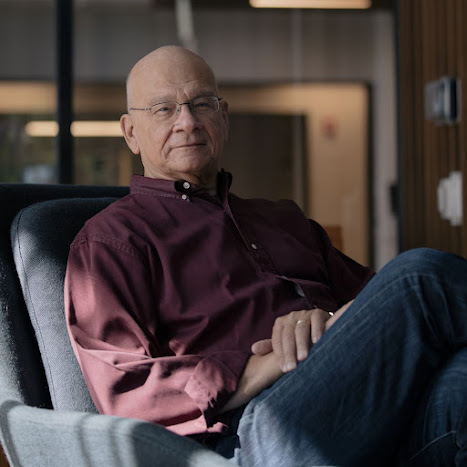 If C.S. Lewis actually said what is attributed to him above (and I am pretty sure he probably did), I have no idea where that quote comes from. I have read a lot of C.S. Lewis, from the Narnia books to some of his more directly "theological" writings, and I can't recall that statement. My internet search found the quotation in various places, including on computer wallpapers and refrigerator magnets, but without any specific reference to Lewis' writings attached.
I came across Lewis' statement in an article in The Wall Street Journal, in its  "Review" section dated Saturday-Sunday, September 3-4, 2022. That article was not about Lewis, really, but about Timothy Keller, who is pictured above. Emily Bobrow's article on Keller was characterized as a "Weekend Confidential."
Since this blog posting is going to appear on a Sunday, I thought the article on Keller might be an appropriate item upon which to comment. Keller is a Presbyterian pastor with "a gift for evangelism," as Bobrow presents him. In 1989, Keller founded Redeemer Presbyterian Church in Manhattan, growing the church from a few dozen members to more than 5,000 weekly attendees across three different locations.
Because the article about Keller is interesting, I would certainly recommend it to any who might be able to penetrate what I am sure must be some sort of paywall protection, erected in cyberspace by The Wall Street Journal. Given my personal politics, the "pull quote" featured in the hard copy version of the article made me interested. I kind of like the idea of an evangelical pastor who says: "I'd rather be in a democracy than a state in which the government is officially Christian."
My comment, today, however, is really more about what Lewis said (or is said to have said) than about Keller and this theological and political views. To me, Lewis' statement about "aiming at heaven," and getting earth as a bonus, is related to that "Two Worlds Hypothesis" that I like to talk about from time to time.
When we fail to note that we live, ultimately, in a "World of Nature," which has also been denominated "The World That God Made," then what we are left with is a human world - the world in which we most immediately live. In our human world, "anything is possible," since we make the rules for the world that we create. If we don't pay attention to the fact that there are "laws," and "rules" that govern the world in which all of our creations are ultimately situated, we will lose our human world, and with it, of course, our life within the World of Nature. We have got to "aim at heaven," in other words, if we want to continue to live, as we do, on planet earth.
You don't have to be a "religious nut," to understand and accept this point. "Our" world is dependent on the World of Nature that we did not create, and the limitations and requirements of the World of Nature are absolute.
You also don't have to be a "religious nut" to see that thinking about "End Times" is a relevant inquiry as we consider the onset of wildfires, droughts, floods, and the ever-growing possibility of atomic disaster, all of which tie to global warming, caused precisely by our human failure to conform what we do to the laws that define the World of Nature.
Aim at heaven.
Good advice!
To Subscribe Just Click This Link
Image Credit:
https://www.wsj.com/articles/pastor-timothy-keller-speaks-to-the-head-and-the-heart-11662136046