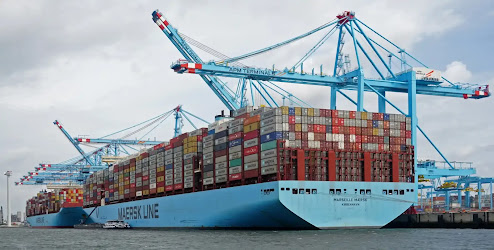 I always enjoy Gary Griggs' informative "Our Ocean Backyard" columns, which appear periodically in my hometown newspaper, the Santa Cruz Sentinel.
A couple of weeks ago, Griggs' column was titled, "Shipping owes debt to Malcom McLean." McLean, says Griggs, invented the "shipping container," ultimately giving us the kind of worldwide economic connection that the image above only begins to suggest.
As I read what Griggs had to say about McLean, and his invention, I was not so much captured by his description of how shipping container commerce has grown, as by the raw statistic that Griggs provided in the very first paragraph of this column:

If you were to look at the labels on almost any of your clothes indicating where they were made, or your car, computer, phone, bike, microwave, tools, or most other things that you use or touch on a daily basis, chances are very high that they were made somewhere else and delivered to a west coast port on a container ship. Today an estimated 90% of all goods are transported by sea in containers (emphasis added).

Griggs promised a future column in which he would tell his readers about how many of these containers have ended up overboard, thus adding to the junk that increasingly clutters and defiles our once-pristine oceans, swept into giant "garbage patches" in the Pacific Ocean, and elsewhere. The New Yorker already has published an article that makes clear how often these containers end up in the water.
But just think about that statistic! Ocean transport of commercial goods is a significant contributor to the greenhouse gas emissions that are putting the living environment in peril. Even when these containers don't fall into the water, and befoul our oceans, shipping container commerce is helping to undermine the ability of human civilization to survive.
A while back, in one of my blog posts ("I Shop, Therefore I Am"), I talked about our outlandishly elevated levels of consumption. Think about Griggs' statistic!
What do we need?
LESS!
When do we need it?
NOW!
To Subscribe Just Click This Link
Image Credit:
https://www.santacruzsentinel.com/2022/08/27/gary-griggs-our-ocean-backyard-shipping-owes-debt-to-malcom-mclean/