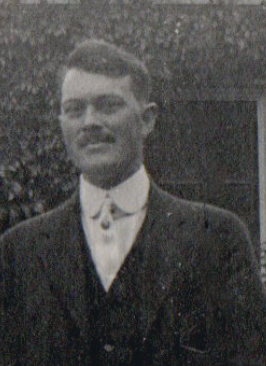 The person pictured above is my maternal grandfather, Durward Dillard Bracken, who was born and grew up in Brevard, North Carolina. Admittedly, the picture depicts "Papa," as I knew him, way before I actually made his acquaintance. In fact, I am pretty sure that this picture antedates my mother's arrival on the scene (much less mine). My mother did arrive, in 1917, and I showed up quite a bit later, in 1943. I really started getting acquainted with Nana and Papa, my maternal grandparents, when they moved from San Francisco to Palo Alto, where my family lived from the time I was in first grade (at Walter Hays Elementary School) to 1961, the year I graduated from Palo Alto High School. Later, after my high-school graduation, my parents moved our family to Santa Cruz.
Nana, my grandmother, died shortly after my parents did move to Santa Cruz, and Papa came to live with my parents at "Wildwood," my parents' place in the Santa Cruz mountains. That is where I really got to know Papa, whom I truly loved. One of my prized possessions, which came as a gift from my grandfather, and from hanging around with him, is the following expression (one of his favorites):
Suck-Egg Dog
Papa used that expression quite a bit, and the "suck-egg dog" designation was applied NOT to dogs, but to male human beings whom my grandfather did not like. The "meaning" of this expression was never strictly defined, at least as I am recalling it. Unworthy and despicable individuals merited the "suck-egg dog" designation.
As indicated, I long ago appropriated my grandfather's expression for my own use, and as I think back, I have largely used it in the political arena, to designate those who said one thing and then did another, or who were generally "toadying" in their relationship to the rich, famous, and powerful, or who betrayed an explicit or implicit commitment of some kind. I would say, for instance, just by way of example, that the following individual is a suck-egg dog, as I generally conjure with the expression:
From my perspective, only a truly unworthy person (unworthy for whatever reason) is properly called out as a "suck-egg dog." Again, as indicated, I have had many occasions to use this expression, and it is one of my grandfather's greatest gifts to me.
Since the "suck-egg dog" expression is pretty unusual, I have been challenged by those who have heard me use it to try to provide a more specific definition. I have looked it up online - something not possible when Papa was using the expression way back in my impressionable high school and college school years - and here is what I found:

Apparently, Zora Neale Hurston, an American author who portrayed racial struggles in the early-1900s American South, and who wrote more than 50 short stories, plays, and essays, used the expression in her story, "Sweat." As Hurston used the expression, the element of "unworthiness" seems definitely to be present. In the story, the woman using the expression is indicated as "hating her husband as much as a suck-egg dog."

Johnny Cash has a song about "egg-sucking dogs," and one interpretation is that calling someone a "suck-egg dog" is to claim either that he is "a man who induces women to cheat on their mates," or is "someone with an unbreakable habit."

I prefer to retain my prerogative to utilize the "suck-egg dog" designation in a more general way, and to apply it to any despicable and unworthy person (in politics or otherwise). Politics, however, does provide numerous examples. That Lindsey Graham example is just the beginning of a list of those whom I would say deserve the title.
I am hoping that those reading this blog posting will now make use of my grandfather's term, when they find it applicable, so that his legacy can carry on. Utilizing that "suck-egg dog" expression is a very convenient and appropriate way to describe people who deserve the designation (see that Lindsey Graham example, above).
Meanwhile, here is a picture of a real "suck-egg dog" in action. 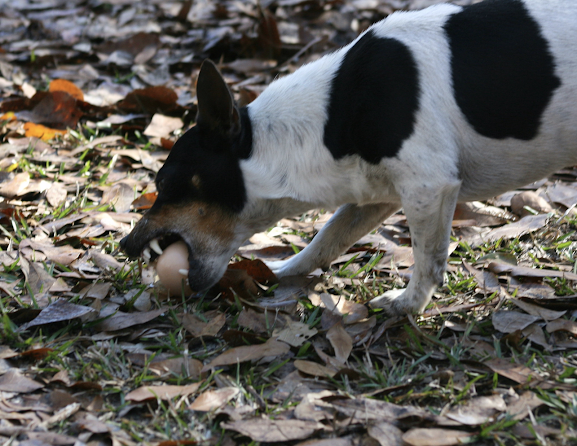