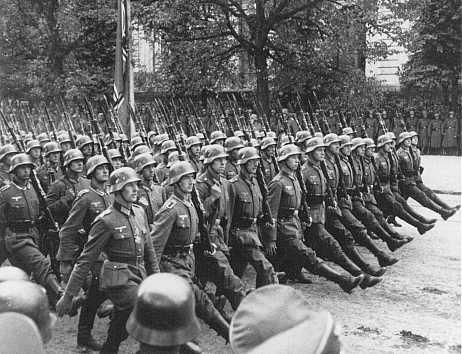 On June 29th, I advertised an upcoming session of the Hannah Arendt Virtual Reading Group, scheduled to take place on Friday, July 1st. I noted that the group would be discussing The Last Interview: And Other Conversations, a book which collects four different interviews with Hannah Arendt.
As it turned out, the Reading Group discussion on Friday, July 1st was particularly stimulating. The group focused on Interview #2, "Eichmann Was Outrageously Stupid." Arendt was interviewed by Joachim Fest, a German historian, journalist, critic and editor who was best known for his writings and public commentary on Nazi Germany. The interview took place on German television, on November 9, 1964. It was, of course, conducted in German, and the broadcast transcript was translated for the book by Andrew Brown.
In response to a suggestion by Fest that Adolf Eichmann was a "new type of criminal," Arendt agreed. "When we think of a criminal," says Arendt, "we imagine someone with criminal motives. And when you look at Eichmann, he doesn't actually have any criminal motives.... He wanted to go along with the rest." Arendt then expanded on this observation:

Going along with the rest - the kind of going along that involves lots of people acting together - produces power. So long as you're alone, you're always powerless, however strong you may be. This feeling of power that arises from acting together is absolutely not wrong in itself, it's a general human feeling. But it's not good, either. It's simply neutral. It's something that's simply a phenomenon, a general human phenomenon that needs to be described as such. In acting in this way, there's an extreme feeling of pleasure.... And I'd say that the really perverse form of acting is functioning, and in this functioning the feeling of pleasure is always there.

Roger Berkowitz, who is the Academic Director of the Hannah Arendt Center at Bard College, noted that the German word that was used by Arendt, to describe the phenomenon she was discussing, is "Mitmachen." That word is generally translated as "participation," but since the German word for "power" is "Macht," Berkowitz said, it is clear that the word encapsulates, in itself, exactly the phenomenon that Arendt described. People feel both pleasure and power when they go along with a crowd. This was, in fact, one of the drivers of the totalitarian response to Hitler and the Nazis that we saw unfurl in all its consequences in Germany.
The Reading Group was not slow to suggest that our own "MAGA" phenomenon is also an example of "Mitmachen." There is great pleasure, and a feeling of power, in "going along" with a large group. Individuals set aside any critical thinking to become part of the group, to experience this pleasure and power. We know, from history, what can eventuate from the "Mitmachen" phenomenon (see the picture, above). The pictures, below, from events occurring in the Capitol Building on January 6, 2021,  can well be seen as providing another example: 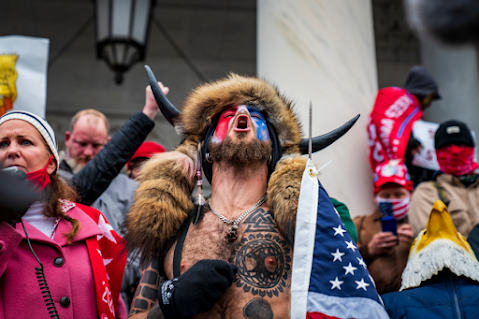