The Santa Cruz Sentinel, a local newspaper in Santa Cruz, California, has opined that "Deep Changes Will Be Needed On Housing." I am quoting the hard copy version of the headline that appeared on the Sentinel's editorial statement on July 1, 2022. Online, the headline is slightly different. The entire editorial statement is appended at the bottom of today's blog posting.
I think the Sentinel is absolutely right that "deep changes" are necessary to address our housing crisis. As the Sentinel notes, properly characterizing the dimensions of our problem: Housing in Santa Cruz County is "unaffordable for anyone not making upward of $200,000 annually." Since the Census tells us that the median annual household income in Santa Cruz County is $89,986, that means that housing (both rental and ownership housing) is unaffordable for huge numbers of local residents. The Sentinel is definitely right in describing the problem, and this is not a news flash for any current Santa Cruz County resident.
Unfortunately, having identified this huge and horrible problem, the Sentinel does not really tell us why the problem exists. In general, the newspaper blames "regulatory overkill" and "local government officials who cater to the not-in-my-backyard sentiments of constituents." Those things, to the extent they actually exist (and they may, to a minor extent), are not really what's causing the housing crisis.
The actual "problem" is that housing prices are, with very few exceptions, set by "the market." As we all know, or as we all should know, "markets" are designed to provide scarce goods to those who have the most money, and who can thus outcompete those who have less. Housing in Santa Cruz County is a "scarce good."
This community is one of the nicest places to live in the entire world. It is also right "over the hill" from one of California's most dynamic job-producing centers, the Silicon Valley, where millions of people live. Many workers in the Silicon Valley do earn $200,000 or more, annually, and lots of them would prefer to live in Santa Cruz, as opposed to living in Mountain View, Sunnyvale, Gilroy, or San Jose. Furthermore, housing costs in the places I just mentioned are typically greater than housing costs in Santa Cruz. Furthermore, many people think that Santa Cruz real estate is a very good investment (which it is). This fact creates another demand for Santa Cruz property. Not only do people who work in the Silicon Valley want to live in Santa Cruz, and so create demand for Santa Cruz housing that way, they also want to purchase property here as an investment, increasing demand for housing in Santa Cruz even more. And, of course, it is also true that those who want to invest in Santa Cruz property may well come from anywhere - even from other countries.
The "demand" for housing in Santa Cruz, in other words, is pretty much unlimited, practically speaking. What about the "supply?" Could Santa Cruz County actually supply enough housing to bring down local prices (and especially to bring them down to the place where someone with an annual income of $89,900 could afford to buy or rent)?
The answer to that question is pretty easy: NO.
In other words, expecting the "private market" to solve the housing crisis by building enough housing to lower the price here to something "affordable" is, essentially, to expect the impossible.
"Reality" is sometimes hard to contemplate, but we do need to be realistic. The private market will never produce affordable housing in Santa Cruz County - even if we reverse our past decision to preserve and protect prime farmland and environmentally sensitive areas - even if the City starts allowing developers to build twenty-story towers, and the City stops caring about the neighborhood impacts of big, high-density developments. There also isn't enough infrastructure to handle the traffic that would be generated by massive new housing developments. And there isn't enough water, either. Neighborhood concerns aren't just based on selfishness (in fact, I think that's the exception, not the rule). New development does have adverse impacts, and it's not fair to existing residents to ignore those.
So, we do need "deep changes" to address the housing crisis, but let's start getting realistic about just how "deep" those deep changes need to be. The private market can't and won't produce housing that ordinary working families can afford. That means that we need public financing to produce affordable housing, because "affordable" housing means housing where the price is not set by the "market," but where prices are fixed at amounts that permit the housing to be affordable. That requires governmental action.
How can that be accomplished? Well, there is money in our state and national economy that could be used to build housing, but the government would have to obtain that money from those who have it now. Presidential candidate Bernie Sanders calls them the "billionaire class." The Occupy Movement called them the 1%.
"Deep changes" really are needed. If California and the nation are not willing to mobilize public funding to produce price-fixed housing with the prices set at a level that ordinary working families can afford, then the picture below shows where those who can't afford market price housing (rental and ownership) are going to end up. It's already happening. If we don't make the deep changes needed, at the state and national level, it is only going to happen more: 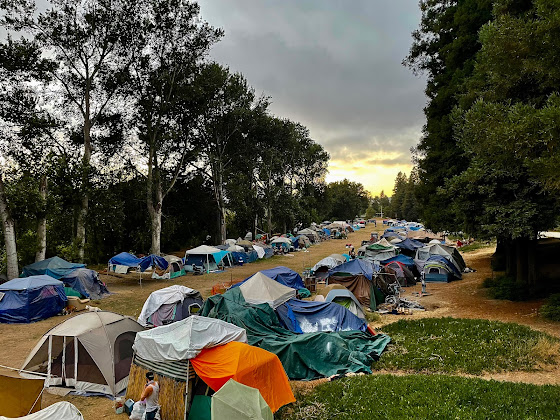 oooOOOooo
As We See It
Deep Changes Will Be Needed On Housing
Second of two parts on housing affordability:
By now, the reasons for California’s and Santa Cruz County’s chronic housing shortage are evident. Factors include high costs, regulatory overkill and resistance from local government officials who cater to the not-in-my-backyard sentiments of constituents.

Not only do prices that make housing unaffordable for anyone not making upward of $200,000 annually, but the recent spike in interest rates, which have sparked some owners lowering asking prices, probably won’t mean housing will get much cheaper, real estate analysts say – not with supply so low and demand so high.

It remains a seller’s market. The state says 180,000 new housing units are needed each year to begin to close the supply and demand inequality that continues to drive prices out of reach for the majority of residents. The median home value for the entire state is almost $900,000, the highest in the United States, according to the state Department of Finance (and more than $1.5 million for much of Santa Cruz County) – a more than 250% increase from a decade ago. In roughly that same period, the median household income in the state has risen just 28%, from $61,400 to $78,700.

Renters aren’t faring any better. The national real estate site Zillow also expects rent prices in the region to rise as rental demand continues to increase. Our Bay Area News Group recently reported that at $3,295, typical rents in the San Jose area rose more than 12% from the previous year.

The dismal reality is that California has the nation’s second lowest level of homeownership. Just 56% of California’s families live in homes they own, barely higher than New York’s 55% rate and nearly 10 percentage points behind the 65% national rate. That figure is even lower for Black Californians, at 37%, and Latinos, at 44%, statewide.

“Homeownership has long been a central feature of the American dream,” a recent Public Policy Institute of California report stated. “It is the leading source of wealth for most families, and over the long run provides families with more stable and lower housing costs compared to renting. Yet … homeownership is out of the reach of many Californians.”

This is one of those crises where government has to be a solution. One way is to enforce regional housing goals. All cities and counties need to contribute their fair share to meeting housing needs but many communities have worked around requirements for new housing units mandated under the state’s Regional Housing Needs Allocation goals. These requirements can seem overwhelming for communities such as Santa Cruz, where the city was tasked with developing a minimum of 747 new housing units by the end of 2023. And according to according to the AMBAG draft RHNA plan, the state may expect as many as 3,400 new housing units from the city by 2031.
Then there’s the new California Dream for All program, where the state plans to allocate $1 billion a year for 10 years to provide down-payment loans to first-time buyers.

Under this program, concurrent with a buyer’s main mortgage, the state offers a second mortgage that covers 17-20% of the home’s price. Buyers would make no payments on this loan until they sell. The idea is to cover the down payment, which means buyers don’t have to save as much up front; it also means their main mortgage is lower, which reduces monthly payments.

While this program has good intentions, it would help only an estimated 7,700 families in a state where about 7 million families are renters. Program sponsors also recognize that pumping money into the system could just drive prices even higher. Others worry that government intervention in home ownership led to the 2008 foreclosure crisis when people were enticed to buy homes they couldn’t afford.

The ultimate solutions will take much deeper changes: Removing local impediments to housing construction, getting more housing near jobs and transportation, creating policies that lead to more middle-income jobs and improving educational outcomes for poor children in a state where more than a third of the state’s nearly 40 million residents live with financial distress.
To Subscribe Just Click This Link
Image Credits:
(1) - https://www.cityofsantacruz.com/government/city-departments/housing-engagement
(2) - Gary A. Patton, personal photo