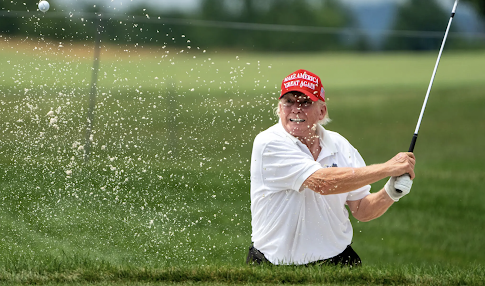 On July 29, 2022, the first page of the Sports section of The New York Times was all about golf. Or, maybe, all about politics and money. The entire page was filled by three separate stories, all related to a LIV Golf event held at former president Trump's golf course in Bedminster, New Jersey. One story was headlined "Watching Trump Play Golf." That is the online version of the headline. In the hard copy version, the headline read a bit differently: "The Host Plays by His Own Rules, or None at All."
Another article was headlined, "Trump Criticizes PGA Tour and Praises Saudis for Backing LIV Golf." Again, that's the online headline. The hard copy headline was a bit more controversial: "Praise for the Saudis, Criticism for the PGA Tour and Skepticism Over 9/11."
Finally, The Times ran a third article, filling out that Sports section first page: "Hey, LIV Golf. Charles Barkley Is Waiting for Your Call." To be consistent, I have given you the online version of that headline. As I read the article in the hard copy version of The Times that was delivered to my door, the headline was a bit more specific about Charles Barkley's active interest in being hired to provide commentary for LIV Golf: "Barkley Lobbies for a Piece of the Action."
oooOOOooo
I have a certain history with golf. My parents, in many ways, centered their life around golf. Before they married, my parents went on golf dates. I found out about that only relatively recently, when I read some of my dad's love letters, which I think can now be found online on the family website maintained by my sister.
During most of the time I was growing up in Palo Alto, California, my parents were members of the Los Altos Golf and Country Club. I took golf lessons there, and spent a lot of time on the premises. Later, when the family moved to Santa Cruz, my parents had a membership at the Pasatiempo Golf Club. My mother was a notable in the "Neuf Trous" (nine holes) women's golf group. Later, my parents moved to Rancho Mirage, to live right on a golf course. I think that was at the Rancho Las Palmas Country Club. Later, after my parents returned to Santa Cruz County, their last residence was at the Boulder Creek Golf and Country Club, where they again had a home right on the golf course. Other family members have also made golf a significant part of their lives - most notably my brother. My grandson is a golfer, and surprisingly (to me), my daughter has recently decided to take up the sport.
How about me? Well, I am definitely not a golfer. Back in the days when I emphasized what I couldn't do, instead of what I could do (maybe I'll tell the story of how and when that changed, in some later blog posting), I entered a "young person's/new golfers" golf tournament at the Los Altos Golf and Country Club. I fancied myself pretty good. I had taken lessons, as revealed above, and had played a lot of golf with my parents. In fact, I think, I actually was pretty good; however, on my very first shot in the tournament, my initial tee-off, I completely whiffed. I completed the round (I don't remember the results), and after that day I never picked up a golf club again.
I could tell a similar story about skiing!
oooOOOooo
While I am ashamed of myself for having been a quitter - with respect to both golf and skiing - I believe that I long ago overcame that "quitting" instinct, and I really don't regret the fact that I am not a golfer today.
That Sports section in The Times, on July 29th, reinforces my impression that golf is often way more about money than about "sport." That clearly comes through in those three stories I have listed. LIV Golf, sponsored by the Saudi Wealth Management Fund, which is overseen by Crown Prince Mohammed bin Salman of Saudi Arabia, seems to be about how golf professionals might make more money. Charles Barkley, currently a basketball commentator - that being a sport where "teamwork" is, or ought to be, the focus - seems to have been somewhat money-motivated as he explored the possibility of switching from basketball to golf. While Barkley appears to have dropped this idea, the idea that he was exploring how he might get a "piece of the action" is revealed in the hard copy version of the headline on The Times' article about his participation in the recent tournament.
Finally, there is our former president's dedication to money. That he has such a dedication to money is well known, and that does come through in The Times' coverage. Even more, of course, what comes through is the former president's belief that he doesn't have to follow the rules - whatever they are, and in any and every situation in which he finds himself.
One of my mother's favorite expressions was "Cheaters never prosper." With respect to Mr. Trump, I'm hoping that this proves, ultimately, to be the case. So far, on the golf course, and otherwise, he seems to be getting away with it!
To Subscribe Just Click This Link
Image Credit:
https://www.nytimes.com/2022/07/28/sports/golf/donald-trump-liv-bedminster.html