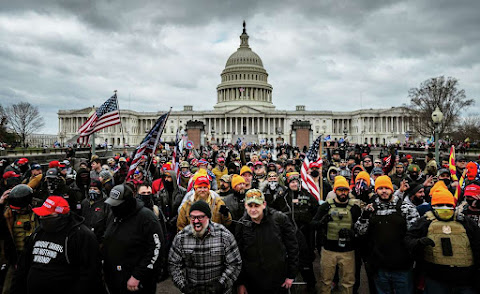 As some of my recent blog postings reveal, I have been thinking a lot about the French Revolution. As much as I'd like to see some fundamental changes in the government, and in what our government is doing (and in what our government is not doing), I can't really say that I am having many warm and friendly feelings about how nice it would be to have something like the French Revolution happen right here.
There are quite a few Americans, however, who seem to be looking forward to a new civil war, right here in the United States of America. At least, that is what the results of a nationwide survey, carried out a little over a month ago, seem to indicate.
I learned about the survey from an article in the San Francisco Chronicle, authored by Joe Garofoli. The title on Garofoli's article was this: "Survey: Half of Americans think civil war coming."
The survey was carried out by the UC Davis Violence Prevention Research Program. Here is a description of the survey, with some of its findings:

A total of 8,620 people who are adult members of the Ipsos Knowledge Panel participated. The sample was designed to represent the general adult population of the United States.

The researchers conducted the nationwide online survey in English and Spanish from May 13 to June 22. The questions were designed to gauge current attitudes and concerns about violence in the U.S. and willingness to engage in specific political violence scenarios.

The researchers note that the findings, coupled with prior research, suggest a continuing high level of alienation and a mistrust of American democratic society and its institutions. Substantial minorities of the population endorse violence, including lethal violence, to obtain political objectives [my note - this is just what happened in the French Revolution].

The survey questions focused on three areas: beliefs regarding democracy and the potential for violence in the United States, beliefs regarding American society and institutions, and support for and willingness to engage in violence, including political violence. Some key findings from those surveyed:

Examining the results as just reported, more than two-thirds of those surveyed think there is a "serious threat to our democracy." However, over forty percent of those surveyed don't think that democracy is as important as "having a strong leader."
It seems pretty clear to me that those two findings are related. If more than forty percent of the population really thinks that having a "strong leader" is more important than democracy, that fact is exactly the reason why there is a "serious threat to our democracy." The "serious threat" is that almost half of the population thinks government happens to them, instead of thinking that government is something that they do themselves.
"Democracy," by the way - the way I use the word - is really a stand-in for "self-government." Understanding that what we are really taking about is "self-government" may provide us with a way to start changing attitudes - and realities - so that the predicted "civil war" does not, in fact, materialize.
Surveys generally seek to answer questions from the point of view of an "observer." They are intended to inform us about what reality "is," at the time the survey is undertaken.
In fact, as I never get tired of pointing out, every human reality that we attempt to assess, looking at reality from the point of view of an "observer," fails to recognize that human realities can be changed (and rather quickly, too). That is true because we are not only "observers," but are "actors," as well. As I pointed out in an earlier blog post, even "Bimbos" understand that "the whole world we made is literally made up, so we can make up solutions to the issues we have."
If there is a "high level of alienation and a mistrust of American democratic society," which is what the survey says is true, the people's "alienation" from what we still call our "democratic society" derives from the fact that our society is not, in fact, "democratic," at all, if what you mean by "democratic" is that the government is working to try to do what the majority of the people want. Lots of surveys show that what the people want is exactly what the government is NOT doing.
Naturally, if we think the government of a "democratic society" should do what the majority want (and if the government isn't doing that, as it demonstrably is not), then it's natural why about half of the people are standing by for a civil war, and why a lot of them are willing to pick up the gun and get involved.
That said, when more than 50% of the people in the United States say that “in the next several years, there will be civil war in the United States,” they are making that prediction based on their "observations," not making a commitment to take "action," to help bring that about personally.
What if we could get those alienated people to stop waiting around for a "strong leader?" What if we could get people to stop believing that a "democratic society" is something that we "observe" (or not), and understand that a "democratic society" is something that we must "create," by our own actions?
If we don't "act," and take action pretty soon, we are, actually, just standing by for a civil war (which is what that survey says we are doing). The survey seems to suggest that the "civil war" that is anticipated is coming to us in "the next several years." Since our next presidential election is scheduled for 2024, with the next president to be inaugurated in early 2025, that "next several years" time period may well be related to that presidential election timetable.
Do we have to just "stand by" for civil war (and maybe acquire a gun, for our personal use, just in case)? That is really what that survey is prognosticating.
I would like to propose that we don't just stand by for the predicted civil war, and that we stop talking about "democracy," and start talking about "self-government," which places the emphasis on our own individual and collective responsibility for having our governmental institutions do what the majority of the people want.
The majority wants big changes, and we can achieve those big changes, too (without waiting for the strong leader, and without picking up the gun).
But that means we need to divert our personal attention and activity to self-government (less Netflix and online gaming; more personal participation in small groups dedicated to political change).
To say it one more time: Self-government (what we often call "democracy") requires that we get directly involved in government ourselves.
Are you unwilling to do that - unwilling to get involved in government yourself? Are you waiting around for that "strong leader," instead?
Well, if that's how you see it, stand by for a civil war, because that's just what "standing by," and looking around, and "observing," and not "acting," is going to get us.
To Subscribe Just Click This Link
Image Credit:
https://www.sfchronicle.com/politics/joegarofoli/article/A-study-asked-Americans-if-they-could-support-17316022.php