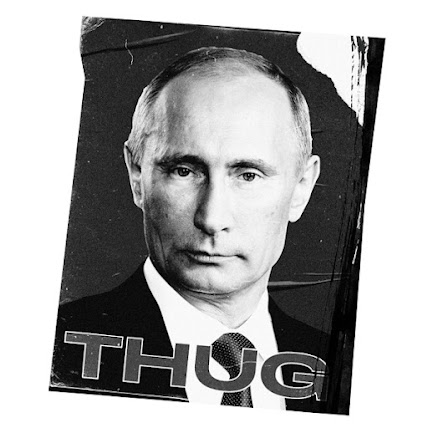 The image above, and that "FuckItAll Fridays" phrase, come directly from a recent email from Adbusters. The link just provided will take you to the Adbusters website, which proclaims, at the time I am posting this, that "Climate Catastrophe Demands Action."
It seems to me that Adbusters is right about that!
Adbusters seems to suggest, as indicated below, that "FuckItAll Fridays" are (or, maybe more accurately, "should be") a way to deal with key challenges, including, I surmise, our climate catastrophe. Adbusters is hoping to create a weekly "global ritual," and proposes that setting aside Fridays for "revolt" is a type of political action that can help galvanize the changes we need. Most immediately, Adbusters is hoping that posting copies of the above poster all over the world on "FuckItAll Fridays" will lead the Russian people to displace Vladimir Putin as the President of Russia.

It is not light that we need, but fire; it is not the gentle shower, but thunder. We need the storm, the whirlwind, and the earthquake.

#FuckItAll Fridays is a weekly global ritual. Every Friday we revolt. This Friday, and next Friday, and the Friday after that too.

For those who may not immediately recognize Adbuster's bonafides, this link will take you to what Wikipedia has to say about the organization. Adbusters publishes a reader-supported, advertising-free magazine devoted to challenging consumerism, and it played a key role in initiating the Occupy Movement.
Occupy was not a "weekly ritual." Occupy called on participants to set aside their normal lives indefinitely, until change was accomplished - until the nation actually did something about the wealth inequality that is so deeply enmeshed with most, if not all, of our social, political, and economic problems.
The "FuckItAll Fridays" approach seems like Occupy-lite, to me, a type of "decaf" version of the kind of movement we actually require.
That said, the idea that we need to say, "FuckItAll" to business as usual may well be something of a precondition to making the kind of genuine changes we need to make. We can't achieve changes if we all keep doing the same old thing.
Again, I think that Adbusters is right on target in saying that "Climate Catastrophe Demands Action."
"Business as usual" is not going to get us where we need to go!
Subscribe Just Click This Link
Image Credit:
https://4eomt.r.ag.d.sendibm3.com/mk/mr/LuzJOQMnZdlprfdokudSwND7m0XCG-0-c50eiFazlW2eSKG0flvOVtkRBofmsd_PokLfWL6JHTt420orzz3cdlgCQ7tIWADPw79TaTnGK0NVc6_dTJGqPPQ-aERhpZb3i8jWj-ZCJQ