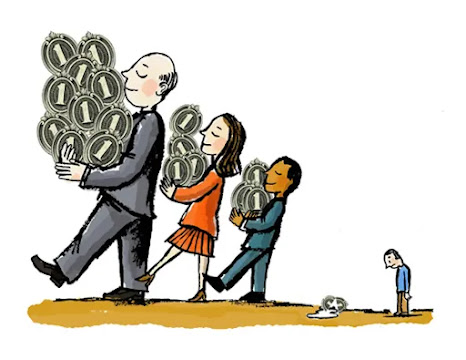 The July 17, 2022, edition of The New York Times carried two articles about "wealth inequality." One of them, by Joshua Hunt, was a "Guest Essay," titled "How I Became a Pathological Liar." Hunt's essay was published in The Times' brand new "Sunday Opinion" section. In his essay, Hunt says that "lying is part of the etiquette of poverty." People who are poor are taught to be ashamed of being so. Thus, they learn to lie.
The Times' "Sunday Styles" section had a five-page spread on how Millennials are facing their "very real fears about money." The article was titled, online, "We Aren't Asking For The Moon," and the very first page of the hard copy version of that section of the paper carried quotes like these: "I'm scared." "I definitely feel behind my peers in almost every aspect." "I currently make $16.50 an hour, which is not enough for me to live on."
Since the "Styles" section is usually where The Times documents the exciting and wonderful lives of the rich and famous, placing an article about the poverty of the Millennial generation in that "Styles" section of the newspaper seemed a little bit weird, at least to me. In that July 17th edition of "Styles," if you didn't want to face the anguish of young people in and heading towards economic calamity, you could read about how Ivana Trump's slogan was "Don't Get Mad, Get Furs." Online, you can find the article by using a link that reads as follows: "Ivana Trump's Style Defined the 'Greed Is Good' Era." Don't worry, though, while Ivana Trump is no longer with us, Ivana's former husband is maintaining the family tradition!
It seems obvious, to me, that when an entire generation can now be characterized by its incipient poverty, and when the "Sunday Opinions" section of The New York Times makes clear that poverty leads to mendacity, which does not lead anywhere good, that something is going to have to "give." Joshua Hunt's article begins with this statement:

The top 0.1 percent and the bottom 90 percent of American households hold close to the same amount of wealth. That's one of the statistics most frequently cited to describe the problem of economic inequality in the United States today. Here are some others: Nearly two-thirds of Americans are now living paycheck to paycheck. An estimated 41 percent - 135 million people - are considered either poor or low-income. Eighteen percent of households earn less than $25,000 a year.

Two-thirds is a lot more than a majority. If democratic and representative self-government can't get itself together to do something about the facts just cited, we're not going to have that kind of government much longer.
And if anybody in that two-thirds of Americans who are living paycheck to paycheck thinks that Ivana Trump's former husband, and his cohorts, are going to do anything positive about the economic inequality that The Times has so dauntingly depicted, let me show you a picture of the Brooklyn Bridge. Check it out, below.
I heard it's for sale. Cheap! 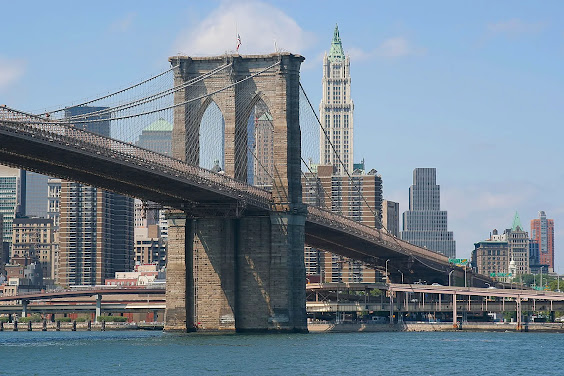