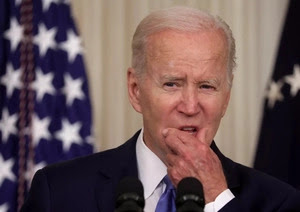 I have been feeling a little sorry for President Joe Biden. I think he is a pretty well-intentioned guy, and we do owe him a lot. After all, he was the guy who beat Donald J. Trump, whose post-election activities (continuing to the present day) have revealed just how close our country came to electing our first American dictator. Thank you, Joe Biden.
Despite the president's good intentions, and despite his past service to our nation (winning the presidency in 2020 capped a long history of political engagement, a lot of it positive), "good old Joe" doesn't get much credit. In fact, Biden's approval rating is in the cellar, and he is regularly ridiculed by Democrats and Republicans alike.
One reason for that, I think, is not personal to President Biden. We have come to believe that the president, as an individual, is supposed to ensure that good things happen, and when they don't (i.e., when we are assailed by inflation, wars, and social unrest) it is, somehow, the president's fault.
Let me suggest that our conviction that it is "the president" whom we should either praise or blame, depending on how we think the nation is doing, is an idea that is fundamentally at odds with the way our government is structured.
The Constitution, in fact, provides that the "legislative" branch of government, not the "executive" branch, is the organ of government most directly responsible for determining what the government does. The president is only supposed to see that the laws are "faithfully executed." The laws themselves, the directions that the laws provide for everything we do, come from Congress.
What if our presidents, instead of accepting responsibility for what is happening (read praise or blame) regularly told the American people that they had better start getting their elected members of Congress to do what needs to be done - get them really to represent the people to whom they are legally responsible?
What if the president spent his time (or her time, someday, we might hope) organizing nationwide, in a very public way, to forge a Congressional majority that would actually deal with the problems we have, and that would help us to realize the opportunities before us.
If we were regularly told whom we ought to blame (or praise), then the president wouldn't have to accept all the responsibility for how things are going. We would come to understand (at least I think it's possible that we would) that WE are the ones responsible for how things are going, and that if our elected representatives in Congress - representing US - aren't doing the job, the ball is in our court to make them perform. Ultimately, in other words, if we truly have a system of "self-government," then we are ones truly responsible for both the good and the bad things.
Just an idea!
I got it from the Constitution!
To Subscribe Just Click This Link
Image Credit:
https://economictimes.indiatimes.com/news/international/us/biden-under-fire-for-embarrassing-remarks-saying-cfo-dropped-dead-netizens-slam-u-s-president-on-social-media/articleshow/92283938.cms