#188 / The Dominance Of Bureaucratic Rule 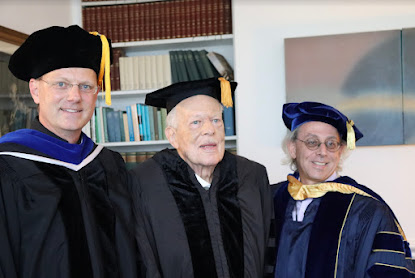 Jerome Kohn is pictured in the center of the photograph above. The photo was taken on May 28, 2022, which is when Kohn was presented with an honorary degree in Humane Letters at the 2022 Bard College Commencement. Roger Berkowitz (on the right in the photo) is the Founder and Academic Director of the Hannah Arendt Center, which is located at Bard College, and Berkowitz presented the degree. Berkowitz's entire remarks are available by clicking this link.
Kohn was Hannah Arendt’s longtime teaching assistant, literary executor, and collaborator, and, says Berkowitz, has emphasized, in Kohn's own writing, a deep concern that both Kohn and Arendt have shared about the decline of the American Republic, "a term Arendt used to describe the American constitutional and democratic political system."
Here is how Berkowitz described the concerns shared by both Arendt and Kohn:

The failure of the American Republic is rooted ... in the dissipation of political power—that is, the tradition and practice of self-government by which groups of people gather together to act and speak in public in ways that make a difference in society ... Political freedom requires more than casting a secret ballot. It means acting and speaking in ways that make freedom and power palpable ... The original American democratic reality of citizens freely exercising power has been eclipsed by an “encroaching social totalism” and the dominance of bureaucratic rule.

We think it normal, now, to talk about "the government," as though the government were an independently-existing entity, different from ourselves. This is not a conception that is compatible with "self-government," a government that proceeds directly from our own action and involvement.
Check out yesterday's blog posting. Kohn and Michael Moore are singing from the same songbook. As Moore puts it:
We Are The Majority
Saying that "We Are The Majority" is to say (and nothing less) that WE are "the government." If we don't deeply understand what this implies, the "American Republic" is, indeed, in danger of disappearance.
To Subscribe Just Click This Link
Image Credit:
https://hac.bard.edu/amor-mundi/jerry-kohn-doctor-of-humane-letters-2022-05-29