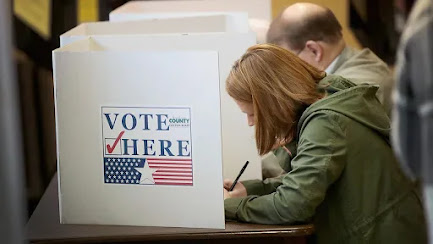 Today is the official "election day" in California, though voting has been underway for quite some time. Today is your last chance to vote. All registered voters received a ballot in the mail on or about May 10th. Registered voters also received a postage-paid return envelope. No cost to vote! No long lines! The State of California is making it pretty easy!  I voted the day after I got my ballot in the mail. How about you?
In Santa Cruz County, there has not been a lot of early voting. As of May 23rd, for instance, only about 1,000 voters in the Third Supervisorial District had returned their ballots. Since there are over 30,000 registered voters in that district, 1,000 out of 30,000 is not a very encouraging number, if you think that getting registered voters actually to vote would be a good idea. I did the math; it's about three percent.
Because I think elections are important - and because this current election is particularly important, from my perspective - I previously provided a "Gary Patton Voting Guide" for any readers of this blog who might care to listen to my advice. Click that link to pull it up. I give my thoughts on Measure D (the proposed initiative measure that would eliminate virtually all references to rail transportation in the County General Plan). It's pretty important! (I recommend a "NO" vote).
Measure E is also of great importance if you happen to live in the City of Santa Cruz. Measure E, if it passes, would reduce the voting power of every voter in the City. Instead of getting to vote for seven City Council Members, each voter would only get to vote for one Council Member, plus a mayor, to be elected citywide. I believe that this measure was improperly put on the ballot. I know that its impacts would make it much harder for neighborhoods to fight back against inappropriate development projects, like the 20-story towers currently proposed for the South of Laurel area. Check the visual, below. Is that what you want for Santa Cruz? If you don't, then don't give up your right to vote for all seven members of the Santa Cruz City Council. I am strongly urging a "NO" vote on Measure E.

Justin Cummings For Third District Supervisor
It would be hard to overstate how important I think it is that Justin Cummings be elected to the Santa Cruz County Board of Supervisors, to represent the Third Supervisorial District. The Third District covers most of the City of Santa Cruz, Bonny Doon, Davenport, and the North Coast. I served as Third District County Supervisor for twenty years, from 1975 to 1995.
Since 1974, when I was first elected to the Board of Supervisors, the Third District Supervisor has provided leadership on environmental protection, growth management, human services issues – and on what I think of as “good government.” That means a government in which the Supervisor doesn’t just do whatever the staff says, but acts to represent what the voters want, and provides leadership in getting us there.
Justin Cummings will continue that tradition. NONE of the other candidates in this primary election will do that. I do know them all, and I do know their records. Justin Cummings is the only candidate who has been tested in a leadership position, as Mayor of the City. He has stood up to the city bureaucracy. He has supported neighborhoods against the developers, while also being the most consistent and effective vote on the Council for genuinely affordable housing.
We need Justin Cummings on the Board of Supervisors. Let’s maintain that tradition of governmental excellence in the Third District!
oooOOOooo
Let me reiterate my main thought. Whether you agree with my specific recommendations or not (and, of course, I hope you do), today is your last chance to vote! If you mail in your ballot, it must be postmarked by today. If you'd like to register to vote today, you may still be able to do that, and then vote. Click right here to be redirected to the website of the Santa Cruz County Elections Office, where you can get details about the election, and about how to make your vote count!
Voting is important. I have voted. Have you? Last chance is today!
To Subscribe Just Click This Link
Image Credits:
(1) - https://www.pewresearch.org/fact-tank/2019/05/29/gen-z-millennials-and-gen-x-outvoted-older-generations-in-2018-midterms/
(2) - https://www.cityofsantacruz.com/home/showpublisheddocument/89120/637877911047900000
(3) - https://www.cummingsforsupervisor.com/