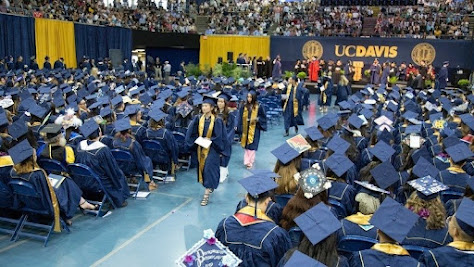 A story from yesterday's newspaper pretty much floored me. Since I am teaching, nowadays, at the University of California campus located in Santa Cruz, I know just how much UCSC students (and their families) look forward to graduation day. The same thing is true, of course, at other UC campuses, including the UC campus located in Davis, California.
What I learned from that article in the Sunday, June 19, 2022, edition of The Mercury News was that this year's graduation ceremonies at UC Davis were simply cancelled, right in the middle of the proceedings. Students were dressed in their robes. Parents and friends had come from all over the state. The ceremonies were being conducted outdoors, and "excessive heat...sickened dozens of people... There were 35 heat-related medical calls and seven people were hospitalized."
As people started keeling over from the heat, the administration simply pulled the plug on the ceremonies. They just stopped them, right in the middle. This may well have been a reasonable and responsible course of action, considering what was happening. Heat shock can become heat death, after all. The students may not have been able to "walk the stage," as the expression goes, but at least their parents and grandparents survived the non-ceremony.
What was so shocking to me was how vividly this truncated graduation ceremony makes clear the realities of global warming. We can no longer take anything for granted. What we have assumed is a world we can rely on is not a world we can rely on, anymore - not even for something so traditional as a college graduation ceremony.
Another story in the paper reported on massive damage at Yellowstone National Park, caused by flooding. About one billion dollars will be needed to repair the damage. This, too, like the story of birds falling out of the sky in Kuwait, killed by heat, is a consequence of global warming.
A student entering college during the coming Fall Quarter would normally expect to be graduating four years later.
If we want that student to graduate (if we want the world we have relied upon to continue to exist) we can't wait another four years to start making changes in what we do.
BIG changes!
To Subscribe Just Click This Link
Image Credit:
https://www.change.org/p/restore-the-uc-davis-2022-undergraduate-commencement-plan-to-the-pre-2020-model