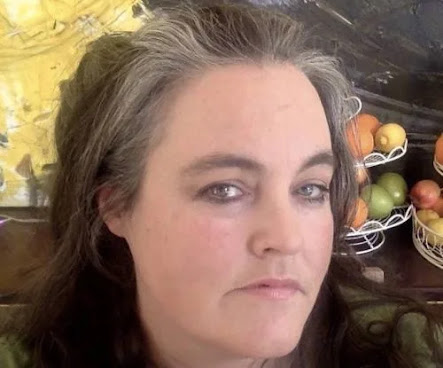 That is Caitlin Johnstone, pictured above. Johnstone calls herself a "rogue journalist," though I think maybe "rogue political commentator" would be more accurate. As explained in the article from Crikey that I link below, Johnstone's claim to be a "journalist" is important to her. Johnstone lives in Australia, but focuses her attention on the United States of America.
I obtained the picture of Johnstone from a column entitled, "Up Yours: telling deviant truths with Caitlin Johnstone." That article describes Johnstone's approach to journalism and "truth telling," as recounted by Helen Razer, another Australia-based columnist.
I subscribe to Johnstone's blog postings, which do include a lot of "truth telling," and my own blog posting, today, was prompted by what I received from Johnstone on Earth Day, April 22, 2022.
Johnstone titled her posting on that day: "Shitlibs Are Foam-Brained Human Livestock: Notes From The Edge Of The Narrative Matrix." The "Shitlibs" mentioned certainly include those who do not properly appreciate that the United States is "the most tyrannical regime on earth by a massive margin." Here are a couple of excerpts from her Earth Day posting, to demonstrate how Johnstone speaks to the "shitlibs" to whom and about whom she writes:

I do hope those of you who hate China but started following my work because you like my Russia/Ukraine takes are not under the illusion that we are friends. We are enemies and I deeply despise you. When things heat up with Beijing I’m going to spend every waking hour trying to make you rage-cry.

"Shitlibs," I believe, is a category intended to include virtually every elected official identified as a Democrat, from the President on down, though that categorization may be a bit underinclusive. Even I might qualify! My question is this: is the "up yours" approach to political commentary going to be persuasive, and change opinion and behavior?
I am not convinced it will! I tend to agree with many of Johnstone's observations, and, in fact, I took an online test, once, that demonstrated that she and I have very similar views. In the past, I have counseled those who might be interested in reading Johnstone's views to ignore the invective and focus on the substantive points being made. Of course, that is still good advice. Nonetheless, this latest diatribe from Johnstone made me think that it could be that a more reconciling approach would be more effective than Johnstone's continuing denunciations of those who aren't willing to copy her rhetoric.
If the United States of America is pursuing policies that are hurtling us, at high speed, towards "nuclear annihilation," and there is some real evidence that this is true, then we need to get the good people of the United States of America to change their opinions and behavior. In fact, I think it is pretty urgent that we succeed in doing just that.
Incidentally, in using the word "good" to describe those who live in the United States of America, I mean to be inclusive, across all political disagreements. Addressing people as "my good friends," or something similar, could substitute in for "shitlibs."
Telling people how much we "hate" or "despise" them is probably counterproductive, in terms of any effort to persuade them to a new or different view of reality. Telling them their brains are "foam," similarly, may not change their minds and hearts - and we do need to change our minds and hearts, quite urgently, since many of our public policies are, truly, hurtling us towards nuclear annihilation.
My thought for the day!
And good luck to us all, good friends!
To Subscribe Just Click This Link
Image Credit:
https://www.crikey.com.au/2018/02/27/riding-the-aberrant-truth-with-caitlin-johnstone/