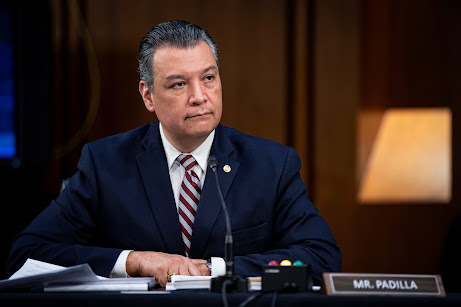 Alex Padilla has just been reelected to complete the term he is presently serving in the United States Senate. He has also won the Democratic Party nomination for a subsequent six-year term of office, with the runoff election to be held in November. He is apparently way ahead in that race, and I am delighted!
Padilla was appointed to serve in the Senate by Governor Gavin Newsom, to fill the spot left vacant when Senator Kamala Harris resigned her Senate seat to become Vice President in January 2021. I think Senator Padilla has done an excellent job representing California since his appointment. As a very nice article in the San Francisco Chronicle makes clear, Padilla has been both hard-working and conscientious.
I have a personal story about Senator Padilla, and thought this might be a good time to document my encounter with State Senator Padilla, in late 2006, after his election to the State Senate in November of that year. At the time, I was the Executive Director of both the Planning and Conservation League, and of the Planning and Conservtion League Foundation, which have offices located in downtown Sacramento. While I still lived in Santa Cruz, I worked during the week in Sacramento and then came home for the weekends.
One day, several weeks after the November 2006  election, while I was in the PCL offices, all alone, Alex Padilla suddenly appeared. I didn't know Padilla, who was from Los Angeles, and he definitely hadn't made an appointment to come to our offices. He just showed up. He is an imposing man, but supremely courteous and cordial. "Hi," he said, "I am Alex Padilla. I have just been elected to the State Senate, and I would like you to tell me about the environmental issues pending in the State Legislature that you think are most important, and that you think I should know about.
One of the most important things that PCL does is to lobby the State Legislature on environmental issues, with specific reference to pending and prospective state legislation. As the Executive Director of PCL, I was certainly able to respond to Senator Padilla's inquiry, which I did. However, the fact that Senator Padilla would walk over from the Capitol to ask for our views, on his own initiative, not in response to any overture from us - and with no demand that we come see him in his office in the Capitol - was unprecedented. It was, in fact, astounding. I think it's fair to guess that no other State Senator, ever, did what Senator Padilla did when he came over to the PCL offices, as a new member of the Legislature, to ask for our best thoughts on key environmental issues.
Alex Padilla is a quality person. I was very happy that he was appointed to take the vacant Senate seat, and I am, as I said right in the first paragraph, absolutely delighted that he has now won that office on his own account.
Here is a salute to Senator Alex Padilla, from whom we can expect, and I am confident will receive, nothing but the best, as one of our two representatives in the United States Senate!
To Subscribe Just Click This Link
Image Credit:
https://www.nytimes.com/2021/03/15/us/politics/alex-padilla-immigration.html