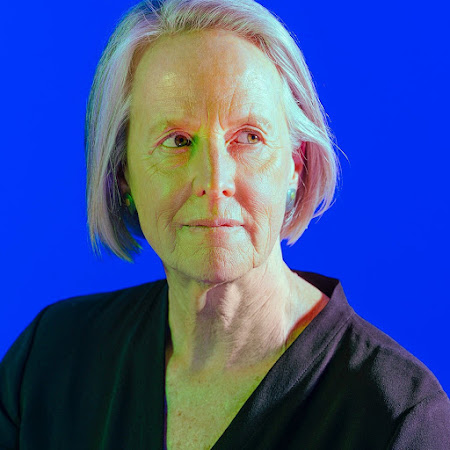 That's political theorist Wendy Brown, pictured above. As Wikipedia tells us, Brown is the UPS Foundation Professor in the School of Social Science at the Institute for Advanced Study in Princeton, NJ. Previously, Brown was Class of 1936 First Professor of Political Science and a core faculty member in The Program for Critical Theory at the University of California, Berkeley.
Brown's picture comes from an article in The New York Times Magazine. In the hard copy version, the article appeared under the following headline, which is a statement by Brown:

We are suffering from highly politicized discourse that often doesn't care one whit about actual education.

For the last seven years, I have been teaching courses in the Legal Studies Program at the University of California, Santa Cruz. Naturally, I am interested in issues relating to the challenges facing higher education today, and was attracted to a discussion between Brown and David Marchese, exploring those issues. In the online version of the discussion, the exchange between Marchese and Brown is titled, "Why Critics of Angry Woke College Kids Are Missing the Point." If you are at all interested in that question, the article from The Times is recommended.
Marchese begins his article with the following statement: "The halls of academia may appear to be overrun by battles over academic freedom, free speech, identify politics, cancel culture and overreaching wokeness.  But why does it look that way? And what are the real causes?"
As I say, if you are interested in that question, I am recommending the Marchese-Brown discussion (and am hopeful that you might be able to slip past any paywall that might well be present). I particularly applaud the following exchange:

Has the hyperpoliticization that you mentioned earlier changed what students expect to be getting out of university? Which is to say, their willingness to entertain uncomfortable ideas?

The immense hurdle is the idea that your future income prospects and investment in those prospects are what you’re in college to pursue. The second problem here is that instead of approaching higher education as a place where you expect to be transformed in what you think the world is, what it takes to understand it, that ideal of a higher education — which is essential to developing citizens — has been almost completely displaced by the idea of bits of human capital self-investing to enhance that capital. So political views, social views, are for many students bracketed if not altogether irrelevant to what they expect a university education to be. What’s the implication of this? That those views are treated as something that you just have culturally, religiously, according to family — but not something that you develop, enrich, maybe change. To put it in brief, neoliberalism essentially aims to roll out education as vocational training, and the extreme right essentially aims to turn education into church. What you have in the middle are a bunch of kids earnestly concerned with social justice, climate crisis, police violence, screaming into that context that their views matter, and that their view should hold sway and if not dictate curriculums at least dictate the culture of campus (emphasis added).

The transformation of "education" into "vocational training" is a huge problem, in my opinion (though I will say that the students I have in my classes at UCSC are not, for the most part, solely focused on using their time in college to find an economic slot into which they can fit, and that will provide them with economic independence once they have graduated). That problem is a lot more prevalent, from what I know, at Stanford University, my alma mater.
We need higher education to be something completely different from "vocational training," and we certainly don't need our colleges and universities to be the place where students are baptized into some species of economic, social, or political ideology.
I think Brown's comments on the topic are profoundly on point.
Recommended!
To Subscribe Just Click This Link
Image Credit:
https://www.nytimes.com/interactive/2022/05/02/magazine/wendy-brown-interview.html