Before human beings could release the immense power of the atom (for good purposes or ill), they needed to have some kind of "theory" that said that this could actually be done. Albert Einstein came up with the theory.
Today, we pretty much all know how Einstein's theory is expressed. The very famous equation presented above says that the Energy (E) potentially available inside any piece of matter can be measured by multiplying its mass (M) times the speed of light (C), squared.
The speed of light is a very big number. Squared, it's really huge. The number is so big that it is hard to believe that Einstein's equation could actually be true. Think about a baseball-sized hunk of uranium, for instance. Could that small amount of matter really contain as much energy as the equation predicts? Well, the answer (as we now all know) is an unequivocal "yes."  The picture below demonstrates energy being released from a piece of matter with a weight (mass) that is almost certainly on the order of a couple of pounds. 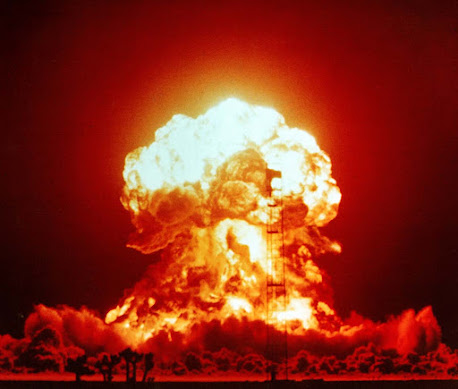 As I have been writing these blog postings over the last twelve years or so, one thing I have been doing, as I look back on it, is trying to articulate what I'd call "theories" that might properly describe the amount of political power that is available to each one of us, and to all of us collectively (power that can be used for good purposes or ill, of course).
Frequent readers of the blog will remember my statements that in the human world our "laws" are not expressions of limitation but are declarations of intention, and that "anything is possible."
The point, of course, is to go from theory to practice, and to figure out how to engineer an actual way to translate that theoretical power into actual, positive accomplishment.
I haven't quite gotten there, unfortunately. But I am still working on the problem!
To Subscribe Just Click This Link
Image Credits:
(1) - Gary Patton, image [Albert Einstein, equation]
(2) - https://en.wikipedia.org/wiki/Nuclear_explosion