#153 / Hillsdale College Gets One Thing Right 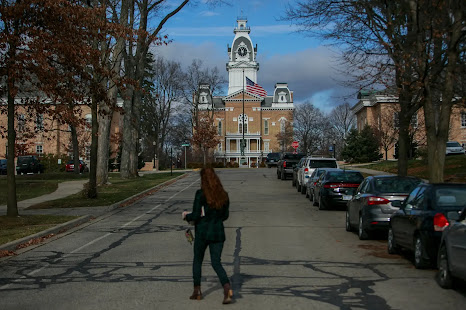 I wrote a recent blog post about Hillsdale College, which I accurately described as "an extremely reliable bastion of ultra-conservative, religious-based education." The blog post in which I talked about Hillsdale College was titled, "Socialism Rising." In order advance its fundraising and educational projects, Hillsdale waves the threat of "Socialism" around like a red cape in front of a bull. Let us not be fooled! That was my message in that blog posting.
On April 11, 2022, subsequent to my own mention of Hillsdale, The New York Times ran a front-page article on Hillsdale College, focusing on the college's efforts to spread right-wing beliefs by way of its affiliation with charter schools. The article was titled, "A College Fights ‘Leftist Academics.’" According to The Times, Hillsdale is "pushing the boundaries on the use of taxpayer money for politically tinged education." Knowing what I know about Hillsdale College (I am on its mailing list), this was not surprising news.
I was not too happy to hear about the Hillsdale College effort to start propagating its particular brand of religious/political education at the kindergarten level. I did appreciate a statement in The Times' story, however, quoting from the 2016 Hillsdale College commencement address, delivered by Justice Clarence Thomas. According to The Times, Thomas' address praised Hillsdale in for "its devotion to liberty as an antecedent of government, not a benefit from government."
The fact that our liberties don't come from government is an important principle that isn't, actually, always properly appreciated and understood. It is truly vital that we do understand it.
As I am teaching in the UCSC Legal Studies program, I quite often find political science and legal studies students writing about how the Constitution provides Americans with the right to free speech, or the right to bear arms, or the right to privacy, or any of the other rights that the Bill of Rights both lists and protects. That is the kind of language that the students sometimes use. The Bill of Rights gives us those rights.
In fact, it is important to be clear. The Bill of Rights does not create or give us those rights that it enumerates. Those rights preexist the listing provided in the first ten amendments to the Constitution. To make this point clear, the Ninth Amendment specifically states that the enumeration of the certain rights described in the Bill of Rights "shall not be construed to deny or disparage others retained by the people."
Our rights are, in other words, as Justice Thomas correctly told the 2016 graduating class at Hillsdale College, an "antecedent" of government, not a benefit that the government has made available to us.
As I pointed out in another blog post, recently, our nation is founded upon principles set out in the Declaration of Independence. That is where the "true purpose" of our nation, and of our government, is best articulated (the Constitution just provides some operating instructions). It is in the Declaration that we can, most clearly, learn what our democratic government is all about:

We hold these truths to be self-evident, that all men are created equal, that they are endowed by their Creator with certain unalienable Rights, that among these are Life, Liberty and the pursuit of Happiness.--That to secure these rights, Governments are instituted among Men, deriving their just powers from the consent of the governed.

Individual rights and liberty come first. The government comes after. Hillsdale College (at least in that commencement address) gets this one right.
So, let's be clear. The principle that our liberties don't come from government, but that the government comes from the exercise of our liberties, means that when it's time to change how things are done, we have a "green light" to make those changes.
Personally, I think it's about time we do that!
To Subscribe Just Click This Link
Image Credit:
https://www.nytimes.com/2022/04/10/us/hillsdale-college-charter-schools.html