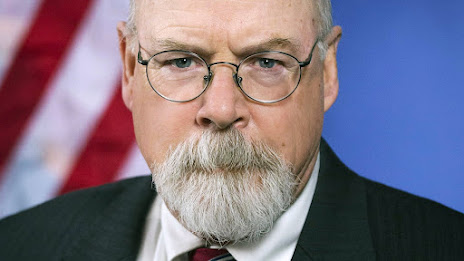 That is John Durham, pictured above. He is a Justice Department Special Counsel, appointed to his Special Counsel position in 2020, by then-president Donald Trump. Durham has used his position in the Justice Department to examine the origins of an FBI investigation into Russian interference in the 2016 U.S. elections. If the link to Wikipedia, provided above, doesn't tell you enough about Durham, you might also want to read The New York Times' article, "Who Is John Durham, the Prosecutor Investigating the Russia Inquiry."
Durham has been prosecuting criminal charges against Michael Sussmann, a former federal prosecutor himself. Sussmann had connections to the 2016 Hillary Clinton presidential campaign, and was charged with lying to the FBI about the origins of the FBI Russia probe. In essence, Durham charged Sussmann with using Sussmann's contacts with the FBI to promote a completely unjustified investigation into possible links between Russian officials and associates of presidential candidate Trump, with Sussmann acting as an agent of the Clinton campaign, and lying to the FBI to disguise that fact. Yesterday, a federal jury found Sussmann not guilty of these charges.
I have not, I must admit, closely followed the various charges and counter-charges that are related to the FBI's 2016 investigations of the Trump campaign. Many think that Trump was grievously wronged; others think that Trump, in fact, had close connections with Russia and that Trump was using those connections to try to damage Clinton. Clearly, proving any such connection between candidate Trump and Russia would likely have been of advantage to Hillary Clinton. This is "insider politics" the very highest level, and it would be easy to conclude that both the Clinton campaign, and the Trump campaign, and the FBI itself are all "dirty."
A blog called emptywheel follows various issues related to national security, and a recent posting in the emptywheel blog was interesting to me. That posting was titled, “and”/“or”: How Judge Cooper Rewrote the Michael Sussmann Indictment.
As a matter of legality, the "conjunctive" and the "disjunctive" are two quite different things. There is a big difference between the word "and" and the word "or." The "and/or" construction, however, so familiar to us, seems to suggest that both "and" and "or" are pretty much the same thing. That way of associating the "and" and the "or" suggests that they are closely tied, but when it comes to proving something in court, it may be a lot easier to prove something in the "disjunctive," rather than something that is "conjunctive."
Below, I am providing the emptywheel outline of what is going on in the Sussmann prosecution. If emptywheel has it right, the Judge's recent ruling did something helped out Durham (and the Trump advocates). Maybe that indicates that Judge Christopher Cooper is actually playing it "straight," not trying to load the dice in favor of Durham, which is what the emptywheel post seems to suggest. Judge Cooper is an Obama appointee, and he made an earlier ruling in the case that is very helpful to Sussmann's defense.
If you are interested in the intricacies of the Durham-Sussmann federal court standoff, read the emptywheel discussion below.
Whether you do or not, there's a lesson here. We need to keep our wits about us as we consider that "and/or" expression. "And" and "Or" are two quite different things, and mental confusion about this is not confined to cases filed in federal court. We often tend to think that someone did TWO things, when maybe they only did ONE. Let's pay attention to that "and/or" differentiation!
oooOOOooo
emptywheel
When Judge Cooper instructed the jury ... he rewrote the indictment approved by the grand jury to reflect that maybe Sussmann was just hiding one client.

Specifically, the Indictment alleges that in a meeting on September 19, 2016, Mr. Sussmann did willfully and knowingly make a materially false, fictitious, and fraudulent statement or representation in a matter before the FBI in violation of 18 USC 1001(a)(2); namely, that Mr. Sussmann stated to the General Counsel of the FBI that he was not acting on behalf of any client in conveying particular allegations concerning Alfa-Bank and Donald Trump, when, in fact, he was acting on behalf of specific clients, namely Rodney Joffe or the Clinton Campaign. [my emphasis]

Now, perhaps there was some discussion I missed finding that the government only had to prove Sussmann was hiding one client — the disjunctive proof business, above. And perhaps it will not matter — I think Sussmann’s team raised plenty of issues with Jim Baker’s credibility such that the jury will find the whole prosecution preposterous, but I also think Durham’s team may have thrown enough cow manure at the jury to stifle rational thought.

But this slight change — unilaterally replacing “and” with “or” — seems to intervene to help Durham recover from one of the most abusive aspects of the prosecution, his failure to take basic investigative steps before charging Sussmann.

As I’ve repeatedly shown, Durham did nothing to test Michael Sussmann’s sworn explanation for his meeting with Jim Baker — that he wanted to give the FBI an opportunity to intervene before a shitshow story happened during election season — before charging. He spent months and months after the indictment scrambling to find the documentation for the efforts the FBI made to kill the NYT story (and ultimately only found part of that documentation), evidence he should have consulted in advance.

Those two facts are how it was possible that Baker only discovered the September 18, 2016 text in which Sussmann explained he was trying to help the FBI on March 4, 2022, almost six months after the indictment (though Andrew DeFilippis misrepresented this at trial).

We also know from Sussmann’s discovery requests that Durham did little to explore Rodney Joffe’s relationship with the FBI before charging. While Durham knew that Joffe had been an informant — and had forced FBI to remove him as such, allegedly as retaliation because Joffe wouldn’t cooperate with Durham’s investigation — it’s not clear whether Durham had found two instances where Joffe had offered up more information about the Alfa Bank allegations to an FBI agent (not his handler) who knew his identity and could easily have shared it with investigators.

In other words, even if you think Sussmann was attempting to hide the Hillary campaign’s role in the underlying allegations (which is different from hiding the campaign’s role in the meeting with the FBI, though Durham’s team surely hopes the jury misses the distinction), the trial actually presented a fair amount of evidence that Sussmann wasn’t hiding Joffe’s role. The FBI knew of Joffe’s role within days of Sussmann’s meeting.

But Cooper rewrote that part of the indictment such that Durham is not being held to his own conspiracy theories when it matters.