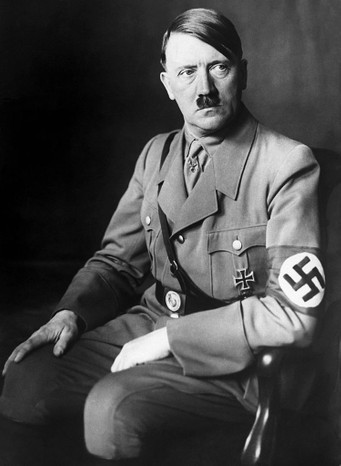 If you read my blog posting yesterday, or my blog posting the day before yesterday, you will have concluded that I think that global warming poses an immense (and immediate) danger to human civilization, and to all living creatures on Planet Earth, definitely including both you and me. You will also have deduced that I think that we need to do something about it, and that we need to act now, taking dramatic action to try to avoid the catastrophe to come.
So, where does Adolf Hitler fit in to this picture - or am I off to a new topic?
I am not off to a new topic. Same topic today as yesterday. Same topic as the day before that: Global warming is a clear and present danger to Planet Earth, and particularly to human beings and to human civilization. The "human world" that we have constructed within the World of Nature is in grave danger, and we need to do something about it.
What though, should we do?
Well, here's the pitch, which I heard from a friend of mine who has a similar view of our human situation, insofar as global warming and climate change are concerned. Because of the potentially world-ending catastrophe we face, we need to act as the "Time Travelers" that we truly are.
Please bear with me as we bring Hitler into the conversation.
Since we who are alive now, and who know the past, know all about Hitler and his rise to power, and about what happened after Hitler took power, we are thus privileged to possess information that was not known by the German people in the 1920s and the early 1930s.
But what if we were "Time Travelers," and could go back to the Germany of that era, still possessing the knowledge we have today? That's a hypothetical, of course, but let's suppose we could, as a thought experiment. What would we do, then, if we were back in Germany, before Hitler took power, knowing what would happen if he did take power?
Would we "stay in our lane," as my friend put it, and keep our heads down and our mouths shut, and continue on with business as usual - which would certainly be the easiest thing for us to do. Or, more heroically, would we be willing to do everything we could to disrupt and stop what we could see was happening all around us, as the Nazis built their political power? Would we risk our lives, and our fortunes, and our sacred honor to try to prevent the holocaust that we would absolutely know was coming if we took no effective action? Or, would we let history just happen to us, in exactly the way that we, as "Time Travelers," knew it would?
As "Time Travelers," we would possess, because of the information we would have about the future, a choice not available to others. We would know the horrible future that would fall upon the world if we could not somehow convince ordinary Germans to take a course different from the one they actually took. Would we dedicate our lives to preventing this forthcoming tragedy, or would we, even though we knew what was coming, not stick our necks out and "stay in our lane?"
Well, we can't go back and stop what happened in Germany, and Europe, after Hitler came to power, but aren't we, actually, "Time Travelers" today?
That's the pitch.
Isn't it true that there are many persons who are privileged to possess information about what global warming and climate change will mean for the future (as those who read and believed my blog posting yesterday, for instance, and the references cited therein)? Aren't there quite a few of us who actually KNOW that there will be death and destruction beyond, almost, what our human imagination can conjure if we don't stop the processes that are moving us towards what the climate scientists are telling us is an inevitable climate catastrophe, and that this catastrophe will, in fact, occur unless human beings make massive changes in what they are doing now?
That's the pitch.
We ARE, in fact, in the same position as the hypothetical "Time Travelers" sent back to pre-war Germany. Some of us - those who have been paying attention - do possess information that is not known by the general public. There are a lot of us who possess this kind of information, too. We don't disbelieve it. We haven't insulated ourselves from it. We know that it's true. We are in the same position as the "Time Travelers." We know what is coming.
And.... since we do know what is coming, isn't it time for us to "get out of our lane" and pledge our lives, our fortunes, and our sacred honor to changing the conditions that are putting human civilization, and life on this Planet, in imminent peril?
That's the pitch!
Time Travelers arise!
To Subscribe Just Click This Link
Image Credits:
https://www.historyextra.com/period/second-world-war/adolf-hitler-fuhrer-facts-guide-rise-nazi-dictator-biography-pictures/