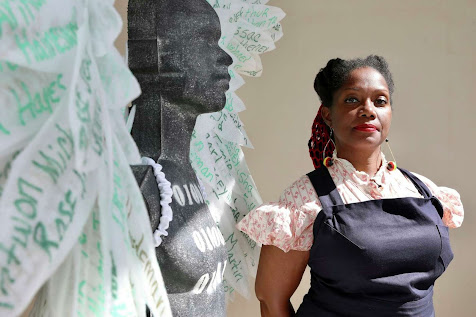 I tend to repeat myself in these blog postings, and at least to some degree I have convinced myself that this is a "feature," not a "bug." Anything worth saying one time is likely to be worth saying twice (or even more). That, at least, is what I tell myself, when I notice that I am just about to mount up on a beloved hobby horse for one more ride.
The picture above comes from this year's Easter Sunday edition of The San Francisco Chronicle, and specifically from a column written by Justin Phillips. The hard copy headline on Phillips' column is titled "Image in police training drives artist's campaign." The story that Phillips tells is an illustration of what I consider to be an important insight into human behavior, and an insight that needs to be understood, and taken seriously, so that the power of this behavior can be deployed in positive, and not negative, directions.
I am speaking of the principle mentioned in the headline to this blog posting. People tend to do what is expected of them. Often, we don't even know that this is what we are doing, but if I am right about this principle, then we need to keep it in mind, so as to make sure that we expect people to do the right things, not the wrong ones.
I first wrote about this idea on July 7, 2017 (Doing What Is Expected). It turns out that if you provide military equipment to police officers, then the police officers who are given that military equipment will be more violent than police officers who aren't provided with the military gear.
I again wrote about this phenomenon - the principle that "we do what is expected" - on January 20, 2019 (Doing What Is Expected, II). In that blog posting, I cited to the work of a American psychology researcher, Judith Rich Harris, whose research demonstrated that "doing what is expected" behavior is found even in very young children.
So, here we go! Third time around!
In this case, Phillips' example of how the principle works is somewhat related to the example from my first commentary. Phillips' Easter Sunday column is about a mixed-media art project by artist Tracy Brown. Brown is on the right in the image above. The figure on the left is her artistic creation, based upon a target dummy that resembles a black man. The online version of the headline on Phillips' column makes the point crystal clear: "A U.S. agency is advertising a target dummy that resembles a Black man. An Oakland artist wants that to stop."
If we train law enforcement officers to shoot to kill, and use a dummy that looks just like a Black man, then the principle that "people do what is expected of them" will result in more killings of Black men, when those well-trained law enforcement officers do what is "expected," as they encounter Black men in real life.
Let me repeat what I said before, in one of my earlier blog postings about this behavioral principle - the principle that we tend to do what is expected of us:

In a way, this might seem discouraging, but I think of the phenomenon as amazingly hopeful. We can transform our human interactions, the way I see it, by changing (and raising) our expectations!
By and large, if we expect more of everyone, everyone will deliver more. Simple expectation, in other words, can provide the energy and impetus to transform the world!