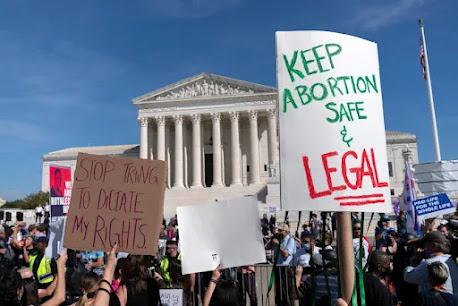 If the Supreme Court were to adopt the draft decision authored by Justice Samuel Alito, reversing the 50-year-old precedent established in Roe v. Wade, would that be a decision based on "principle," or would the decision be based on "politics"?
It has been suggested that once the Supreme Court is clearly revealed to be basing its most consequential decisions on "politics," as opposed to basing them on "principle," the credibility of the Court will be irremediably damaged. The "leak" of the draft opinion reversing Roe v. Wade seems to argue that it is "politics," not "principle," which is playing itself out in the recent drama. Jeffrey Toobin, a knowledgeable Court observer, has said that the release of the leaked opinion is "shattering," and that he "doubts if the institution is going to recover." Since Toobin himself has "recovered" from a pretty embarrassing incident (click for the story, if you don't know it), maybe this is a case of "he should know."
At any rate, what we all know is that Justices of the Supreme Court are not elected, and in a democracy, "political" decisions, affecting all of us, are supposed to be made by elected officials, who represent the people. The Court has, traditionally, claimed to base its decisions on the provisions of the Constitution, and on precedent (which has generally been held to be sacrosanct). If that is not how the Court is going to roll in the future (and the draft opinion suggests that it's not), then big changes really are ahead.
An article on the front page of the May 9, 2022, New York Times, bears the following online title: "If Roe Falls Is Same-Sex Marriage Next?" Alito's draft opinion specifically says that there is no connection whatsoever, though both abortion rights and the right to marry someone of the same sex are based on the same precedent, Griswold v. Connecticut. Griswold found a "right of privacy" in the United States Constitution that is the "principled" reason upon which both Roe v. Wade and Obergefell v. Hodges are founded.
Here's an excerpt from the story in The Times, which I think contains a little "tell," making clear, despite Alito's protestations, that it is "politics," not "principle" that is at the foundation of what Alito is proposing:

The opinion, by Justice Samuel A. Alito Jr., provided conflicting signals about its sweep and consequences. On the one hand, he asserted, in a sort of disclaimer that struck a defensive tone, that other rights would remain secure.

“To ensure that our decision is not misunderstood or mischaracterized, we emphasize that our decision concerns the constitutional right to abortion and no other right,” he wrote. “Nothing in this opinion should be understood to cast doubt on precedents that do not concern abortion.”

So, where's the "tell" in what Alito has written? The "tell" is in Alito's use of the word "right." Alito does not say, "our decision concerns only the claimed constitutional right to abortion...."
Alito concedes that there is, in fact, a "constitutional right to abortion," even as his draft decision would presume to take that right away.
As we know from the Declaration of Independence, our rights are "unalienable."
Our rights are unalienable. That is what we believe - and that is what we have always believed. Otherwise, where "rights" are not involved, politics decides policy, and democracy demands that the "political" decisions that affect our lives be made by representatives upon whom we have voted to confer that power. "Political" decisions can change, as our politics changes, and this is exactly what we expect. But our "rights" are unalienable!
Will the Supreme Court ever recover from the decision proposed in the Alito draft? This is the question raised by Jeffrey Toobin. I don't know whether the Court could ever recover, but if I were on the Court - and no matter what my "politics" were - I would never vote to put that question to the test.
There are various procedural "off-ramps" that the Court could utilize to avoid the need to adopt the precedent-shattering Alito draft. We can only hope that the Justices will use them, and rethink the trajectory that the Alito draft has mapped out, because what Alito has proposed would undermine the entire history of American constitutional law.
To Subscribe Just Click This Link
Image Credit:
https://www.abc.net.au/news/2021-10-03/women-s-march-targets-us-supreme-court-with-abortion-on-line/100510566