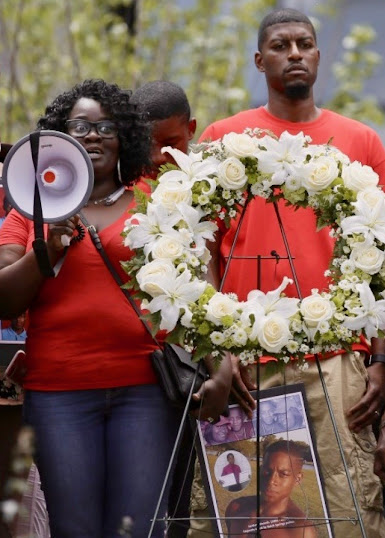 The picture above was taken at the funeral of Jordan Edwards. It illustrates an article published online in the June 30, 2017, edition of The Washington Post. The article was titled, "Does military equipment lead police officers to be more violent? We did the research."

Not to keep you in suspense, the answer to the question posed in the headline is, "Yes." Being furnished with military equipment does lead police officers to be more violent. That's what Ryan Welch and Jack Mewhirter say. Welch is a senior data analyst for the College Transition Collaborative at Stanford University, and Mewhirter is an assistant professor in the department of political science at the University of Cincinnati. They did the research!

To review the research, click the link. You can also ponder what I consider to be a fundamental truth about the way human beings conduct themselves. Mostly (not always, admittedly), people do what they are expected to do. If you expect the worst, you'll almost certainly get it. If you expect the best, you will often be surprised by very positive reactions.

What do we expect from our police officers? From coast to coast, as we provide them with military equipment, we tell them that we expect them to act like members of a domestic army. When that is our expectation, we are telling the officers we arm with those military weapons that we, the public, are "the enemy." Does that seem too strong a statement?

On April 29, Officer Roy Oliver of the Balch Springs Police Department in Texas shot and killed Jordan Edwards, who was a passenger in a friend’s car. Oliver claimed that, responding to a call about underage drinking at a noisy high school party, he heard gunshots, ran to his police cruiser, and grabbed an AR-15 rifle. Body camera footage shows that as the car carrying Edwards, 15, was moving away, Oliver fired three rounds into the car, hitting the teen in the back of the head and killing him.

Young black men at a party. A police officer armed with the civilian equivalent of the Army's M-16 rifle.

It is already life-threatening for any person of color, and for any mentally ill person, to have to encounter a police officer. Does that seem too strong a statement? Tell it to the family and friends of those who have been killed.

Unless we all want to live in a war zone, we had better stop furnishing military weaponry to our "cops on the block." We had better take away those guns and tanks.